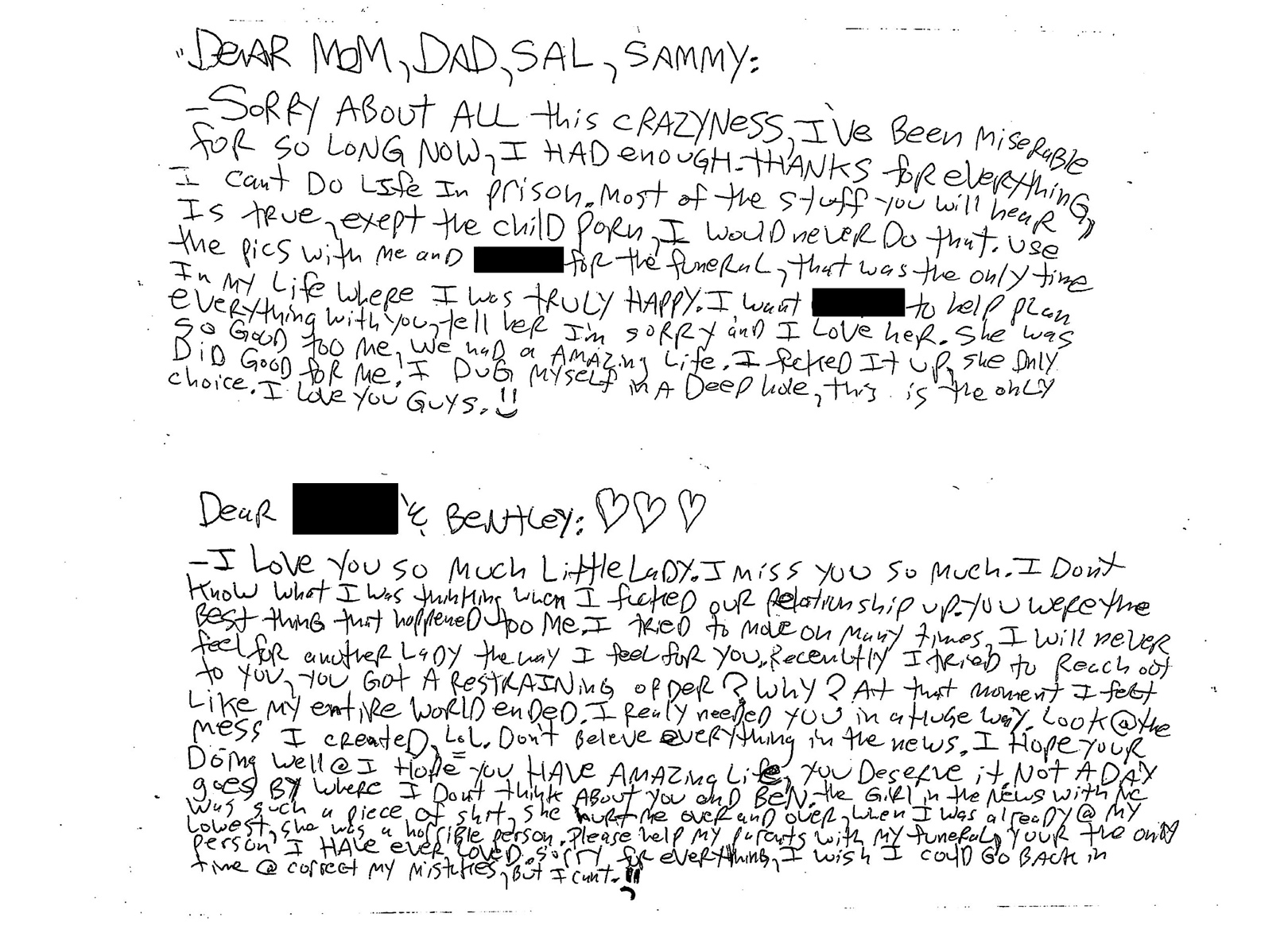 Police in New Jersey have released two suicide notes written by a man who they suspect murdered his ex-girlfriend.

John Ozbilgen, 29, hanged himself in his parent’s garage on November 22nd, weeks after his ex Stephanie Parze was last seen alive — and weeks before her badly decomposed body was discovered on the side of a road.

He left two notes; one addressed to his family, the other to another ex-girlfriend. He wrote them two days after being released from jail on an unrelated child pornography charge — which he appears to claim in one of the notes was the only false report against him.

In the first note, addressed to “Mom, Dad, Sal, Sammy”, he writes:

“Sorry about all this crazyness, I’ve been miserable for so long now, I had enough. Thanks for everything, I can’t do life in prison. Most of the stuff you will hear is true, exept the child porn. I would never do that. Use the pics with me and [redacted] for the funeral, that was the only time in my life where I was truly happy. I want [redacted] to help plan everything with you, tell her I’m sorry and I love her. She was so good too me, we had an amazing life. I f–ked it up, she only did good for me. I dug myself in a deep hole, This is the only choice. I love you guys. =)”

In the second note, apparently addressed to the person redacted in the first, he never mentions Parze by name, although he does reference “the girl in the news with me”, who he calls “a piece of s–t” and a “horrible person” who “hurt met over and over.”

The second note, addressed to “[redacted] and Bentley”, reads:

I love you so much little lady. I miss you so much. I don’t know what I was thinking when I f–ked up our relationship. You were the best thing that happened to me. I tried to move on many times, I will never feel for another lady the way I feel for you. Recently I tried to reach out to you, you got a restraining order? Why? At that moment I felt like my entire world ended. I really needed you in a huge way. Look @ the mess I created. LOL. Don’t believe everything you read in the news. I hope your doing well & I hope you have an amazing life, You deserve it. Not a day goes by where I don’t think about you and Ben. The girl in the news with me was such a piece of s–t, she hurt met over and over, when I was already @ my lowest, she was a horrible person. Please help my parents with my funeral, your the only person I have ever loved. Sorry for everything, I wish I could go back in time & correct my mistakes but I can’t. =(

The notes were obtained by the Asbury Park Press through a public records request.

25-year-old Parze went missing on October 30th after returning from a night out with her family. Her badly decomposed remains were not found until 13 weeks later, on January 27, by two local teens out walking. The cause of death has not yet been revealed.

During his child pornography hearing, prosecutors told the court Ozbilgen had a history of violence against women; three had filed domestic abuse complaints against him — including Parze.

The second woman, an ex-girlfriend, told Asbury Park Press he had choked her unconscious several times, during sex and arguments. She said she dropped the charges because she couldn’t make her court appearances.

The third woman was not identified, but may be the woman the second suicide note was addressed to, as it claims she obtained a restraining order against him.

“No one else is responsible for her death. That responsibility belongs to John Ozbilgen, and John Ozbilgen alone,” Gramiccioni said.

Ozbilgen’s parents however insist their son was innocent.

“We don’t truly know what happened to Stephanie, but what we do know is John never said that he hurt Stephanie to us or in the note that he left,” they said.

“We believe he is innocent, but all the pressure from the false child pornography charges and the constant searches and relentlessness caused him to take his own life.”