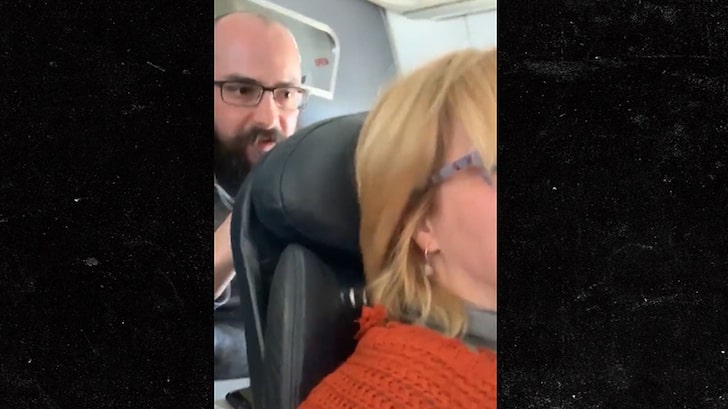 To recline or not recline? To punch or not to punch? Two super pissed off American Airlines passengers have everyone asking those questions, and ultimately … the FBI might have to get involved.

A woman named Wendi Williams, of all things, recorded this video of the guy sitting behind her on a Jan. 31 AA flight from New Orleans to Charlotte. She posted it last week, but now it’s gone viral because you see the guy repeatedly punching her seat.

As for WHY wannabe-Tyson was treating Wendi’s seat like a speed bag — she says it’s because she had the nerve to recline. We think it’s relevant that his last row seat could not recline. At one point in the video he leaned forward and said something to Wendi that sounds like, “This is a turbulent flight.” It’s hard to make out over the jet engines, but whatever he said he was clearly jabbing, verbally this time, at Wendi.

Wendi says things got even more annoying when she reported him to a flight attendant … who she claims “rolled her eyes,” told Wendi to stop recording video, and gave Ali Jr. some rum for this troubles.

When the FA came. She rolled her eyes at me and said, “What?” She then told him it was tight back there and gave him rum! She told me I had to delete the video! It’s against the law to video on a plane. I asked her name & She gave me a Passenger Disturbance Notice! https://t.co/zRwy5JYr9s

Wendi says she’s escalating matters by pressing charges with the FBI against the “man who mistook me for a punching bag.” She says American apologized, but hasn’t accepted responsibility for the flight attendant fueling up Mayweather-in-training with booze.

I was contacted via phone by @AmericanAir, they apologized but really didn’t accept any responsibility for the flight attendant’s actions. I will be calling the FBI to press charges against the “man” who mistook me for a punching bag. Anyone who doesn’t like it, I don’t care!

BTW, Wendi also claims she’s had to get x-rays, has headaches and lost time from work since going 12 rounds with her fellow passenger.