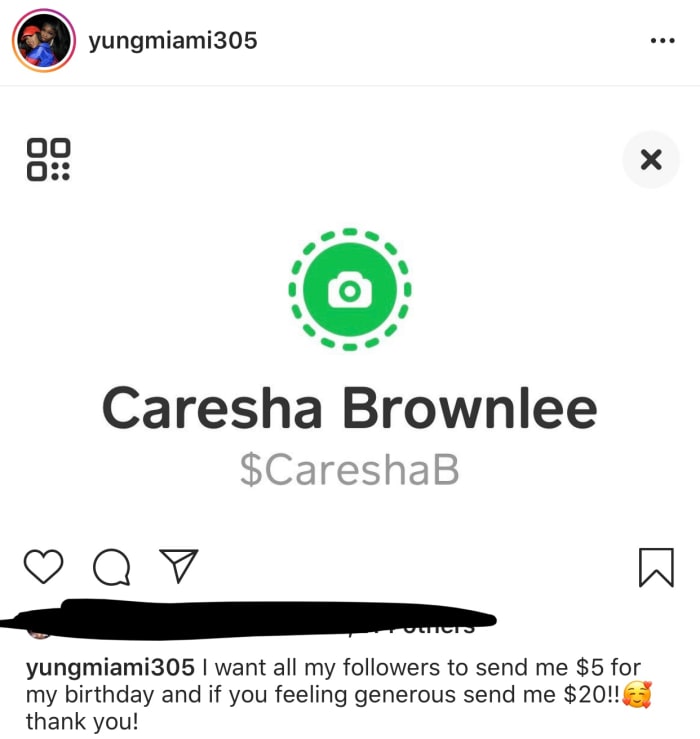 Female rapper and half of the City Girls, Yung Miami was on Instagram yesterday, begging her fans for money.

Yung Miami, real name Careesha Browlee, recently gave birth to her second child. And she must need the cash for her new baby, because celebrities don’t typically beg fans for money via Cash App.

But Careesha did – and it worked.

Careesha asked that all of her followers send her $5.00 each, as a birthday present. But she also requested that her “generous” followers, could send her $20 instead. And then she posted her Cash App information.

Here’s what she wrote to fans:

But as soon as she posted the Cash App request on Instagram, many fans launched a mutiny in the comments. They called the 23 year old Miami rapper “ghetto”, “broke” and “greedy.”

Careesha quickly realized that her comments were flooded with angry fans, so she deleted the post.

Here are some comments that were made before the post was deleted:

Imagine being an “artist” and asking your followers for birthday money.

spent all her money on getting her body done i guess

Wow! This is like the first time I’ve seen a celeb ask for birthday money from fans. And I am certain some dumb*ss motherf*ckers sent a piece of their rent, child support, and tuition bill to her.

But don’t get it twisted – her plan did work. Careesha managed to get thousands of dollars, and the post was only up for a few minutes. Look at how many people sent the millionaire rapper some money: