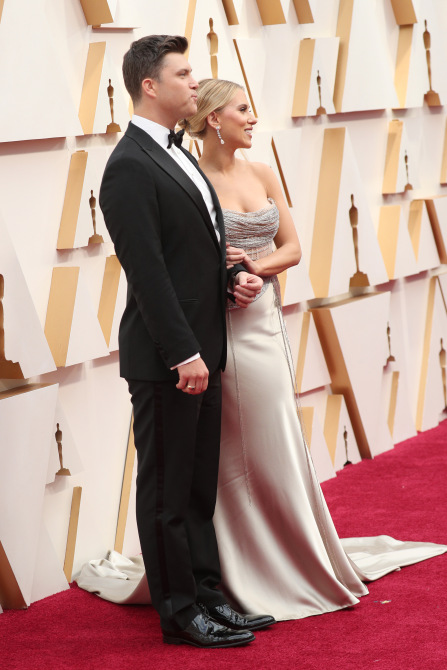 She may have two nominations, but Scarlett Johansson and Colin Jost’s Oscars 2020 photos prove she’s already won. The Marriage Story actress, 35, and the Saturday Night Live cast member, 37, walked the red carpet at the 92nd annual Academy Awards on Sunday, Feb. 9, where they didn’t hold back on their PDA. The couple also showed off Johansson’s shiny new engagement ring after Jost popped the question in May.

Johansson was playful alongside Jost on the red carpet. The Marriage Story star sported her hair in a low bun, giving us another rare sighting of her back tattoo. Meanwhile, SNL comedian Jost looked on patiently as his soon-to-be wife stunned in her cream-colored gown. Jost, for his part, stood out in a classic black-tie suit.

Johansson is nominated for two categories at the 2020 Oscars. The first is for Best Actress for her role in Marriage Story, in which she plays Nicole Barber, an up-and-coming actress who moves to Los Angeles from New York amid her divorce from her husband Charlie Barber (Adam Driver.) Johansson’s second nomination is for Best Supporting Actress for her work in Jojo Rabbit, in which she plays Rosie Betzler. In the film, Johansson’s son, a Hitler youth member, finds out that she’s hiding a Jewish girl in her attic. Both categories are the first time Johansson has been nominated for an Oscar.

Jost confirmed his engagement to Johansson in May 2019. The SNL cast member’s rep told the Associated Press that he proposed to his now-fiancee after two years of dating, and the couple has not set a wedding date yet. Johansson and Jost met in May 2017 after she made a guest appearance on SNL. The episode, which was hosted by Dwayne “The Rock” Johnson, included a cold opening sketch, in which Johansson played Ivanka Trump. The Marvel star and her now-fiance became red carpet official in April 2019 at the premiere of her film, Avengers: Endgame, in which she plays the Black Widow.

In December, Johansson gushed on “The Ellen DeGeneres Show” about her fiance’s proposal. “He killed it,” she said. “It was surprising, he’s got a lot behind that news desk he’s hiding. He’s very charming and very thoughtful and romantic. But yeah, I was surprised. Even if you kind of imagine what that moment’s gonna be like, it’s still a beautiful moment.”

She continued, “It was very personal. It was a special moment. I think, more than anything, when someone tells you they want to spend their life with you, that’s a lovely, special thing.”

We have to say: Johansson and Jost also killed it on the red carpet.