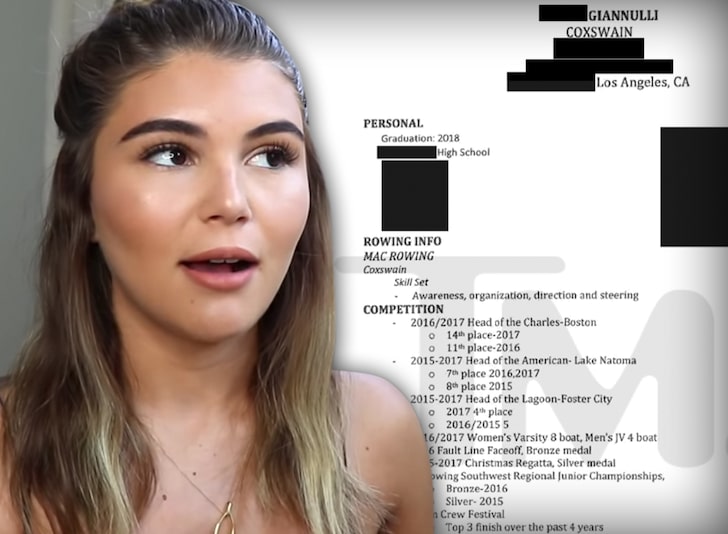 Lori Loughlin and Mossimo Giannulli‘s youngest daughter has quite the list of accomplishments in rowing — at least her resume made it seem that way to USC.

Federal prosecutors released some of the documents Olivia Jade submitted to USC to make it seem like she wanted a coveted spot on its crew team … and it’s packed with a list of events and some impresses finishes. Remember, Olivia never really competitively rowed a day in her life.

However, according to the docs, from 2014 to 2017 … Olivia earned 2 gold medals, 2 silvers and 2 bronzes as the coxswain for her high school team. She didn’t do so well in the prestigious Head of Charles race in Boston. In 2016, her team came in 11th, and the next year they came in 14th.

The resume also suggests where Olivia could be a very successful coxswain in one of USC’s 4 boats. Interestingly, she points out her older sister, Isabella, is already on the school’s roster as coxswain for boat #4. The resume ends by boasting Olivia is “highly talented and has been successful in both men’s and women’s boats.”

The feds are obviously including the resume as an exhibit to show how extensively they believe the Giannullis lied and plotted to get their daughters into USC.

Lori and Mossimo’s lawyers have long maintained they only submitted materials that Rick Singer asked them to, and had no knowledge of anyone being bribed at the university.