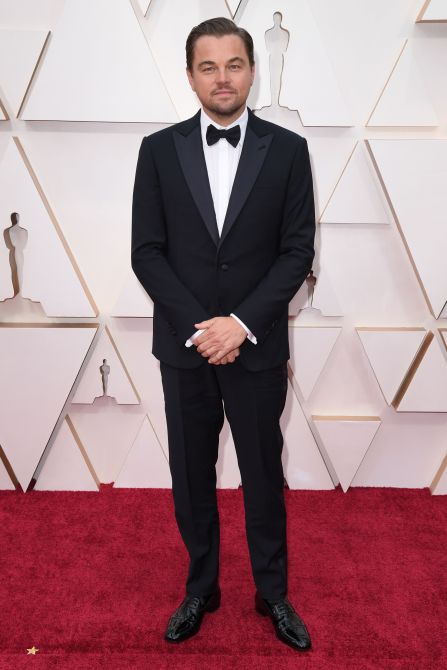 Well that was unexpected. Leonardo DiCaprio’s Oscars date 2020 was his girlfriend Camila Morrone, and fans are shook. Though he walked the red carpet solo, the Titanic actor, 25, wasn’t alone when he took his seat in the Dolby Theatre in Hollywood, California, for the 92nd annual Academy Awards on Sunday, February 9. With him was his 23-year-old girlfriend.

DiCaprio is nominated at this year’s Oscars for his role as Rick Dalton in Quentin Tarantino’s Once Upon a Time in Hollywood. The Oscar winner and the model were first linked in April 2017, but didn’t confirm their relationship until months later in April 2018 when they were photographed kissing at Coachella. Given the couple’s private relationship, fans were surprised to see Morrone next to DiCaprio as his date. “cami and leo sitting next to brad pitt and his mom….. i need to.. be there… to discuss…. things,” one user wrote. Another added, “LEO BROUGHT CAMI???!?!!!”

Since the two became official, DiCaprio and Morrone’s relationship has been criticized for its 22-year age difference. Morrone responded to the criticism in December 2019. She told The Los Angeles Times, “There’s so many relationships in Hollywood—and in the history of the world—where people have large age gaps,” she said. “I just think anyone should be able to date who they want to date.”

Morrone also addressed her critics in July 2019 when she took to her Instagram Stories to slam those who had negative opinions of her relationship. “I just read some of the comments on my Instagram,” she said at the time. “And, my God, people are so mean and full of anger with people they know nothing about. I guess I just hope on this Friday that people learn to live with a little less hatred and place their time and interest elsewhere because living without hatred feels pretty good.”