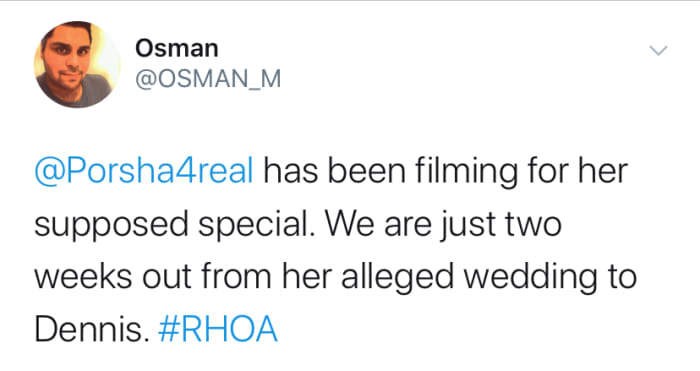 Real Housewives of Atlanta’s Porsha Williams and her fiancé Dennis McKinley are set to get married in just two weeks – and it’s already starting to look like the two may be ready to break up AGAIN.

MTO News has confirmed that Porsha and Dennis have been stealthily filming a new spin-off show with Bravo, surrounding their upcoming wedding.

Unfortunately, things aren’t going to well for the couple, at least not on camera.

We spoke with one of the people associated with Porsha’s new show and she explained, “They’re doing a lot of fighting on camera, and Porsha’s been crying. That’s not the kind of stuff you want to see before a wedding.”

The insider added, “Well it’s good tv. But it doesn’t look good for their marriage.”

The couple are set to walk down the aisle on New Year’s Eve in Atlanta.

Here’s a receipt proving that the two are filming a show together: