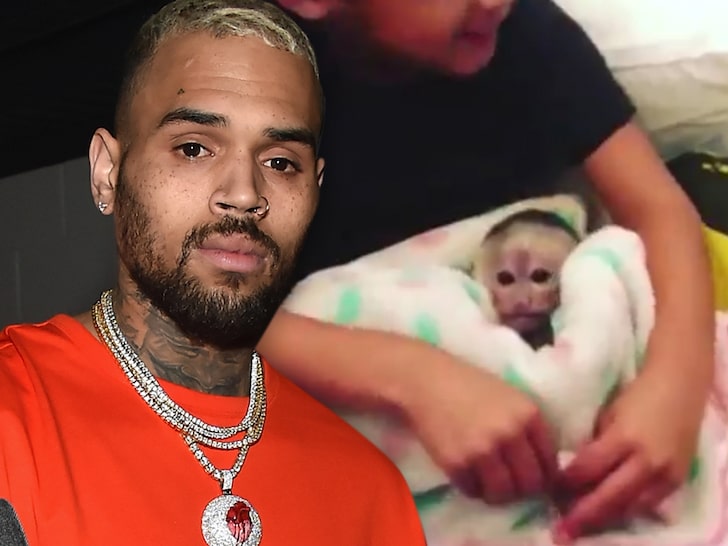 2:59 PM PT — A spokesperson for PETA tells TMZ, “The pet trade tears baby monkeys away from their mothers and sells them to people who can’t possibly care for them properly. CA wildlife officials did the right thing in acting on PETA’s complaint and seizing this Capuchin from Chris.”

They continue, “We hope this penalty will remind people everywhere that monkeys are sensitive wild animals, not “pets,” toys, or Instagram props.”

Chris Brown is now banned from monkey business — like, real monkeys — for the next 6 months … after making a deal with the D.A. in his illegal pet case.

Chris’ attorney was in court Wednesday morning, as the judge placed him into a diversion program for the case of the Capuchin monkey he bought back in 2017.

The terms prohibit Chris from buying any monkeys until June 6, 2020. He also has to pay $35,000 to the monkey retreat facility where his old monkey is now living. If he sticks with the program, all charges will be dropped after June 6. The judge also left it up to the monkey retreat to decide if Chris can have visitation with his ex-pet.

TMZ broke the story … CB claimed he didn’t own the monkey, Fiji. The L.A. City Attorney had charged him with 2 counts of having a restricted species without a permit.

Brown was adamant the video showing Royalty playing with the monkey was NOT taken at his L.A. home. He claimed the video was actually shot in Vegas, where the monkey lived with a relative who was the real owner.

As we reported … Chris took major heat for posting the video of his then-3-year-old daughter playing with the exotic pet. People were freaking out that she was in danger because the monkey’s a wild animal. Chris told everyone to take a chill pill.

Important to note … the judge said after the diversion program, Chris is free to own monkeys again — but it’s gotta be a non-restricted species and the monkey’s gotta have its papers.