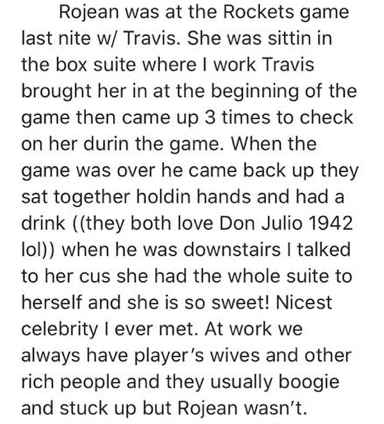 Last month rapper Travis Scott and Kylie Jenner announced that they were splitting. While the announcement was mutual – it was clear that it was Travis who wanted out of the relationship.

At the time of the breakup, reports came that Travis was secretly dating a beautiful young Insta-model named SweetYungRo – on the side. Well now it looks like Travis has elevated Ro from the position of side chick – to that of main chick.

According to MTO News’ rock solid snitch, Yung Ro is currently on tour with Travis.

And two nights ago, a fan spotted the two together at a Houston Rockets game:

But there are costs to becoming Travis’ main chick. Last month, YungRo was forced to put Kylie Jenner, and the entire Kardashian clan, on blast for trying to sabotage her career over her association with Travis:

Here’s what she posted online:

Here are pics of Ro: