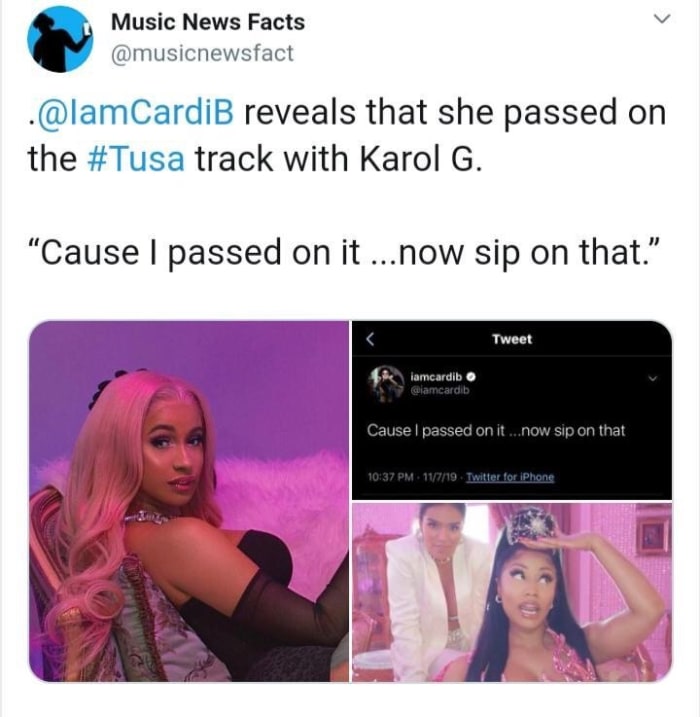 Nicki Minaj and Cardi B are going at it again – this time on social media.

It all started two days ago, when Nicki Minaj released her newest track – a Spanish language song with Karol G entitled Tusa

Cardi B went on Twitter and shaded Nicki publicly – telling fans that the only reason Nicki got the track is because Cardi “passed on it.”

Shortly after Cardi posted the shady tweet, she deleted it:

Cardi also has a new Spanish language track out now with Anuel – who is Karol G’s fiancé. Shouldn’t she be pushing THAT SONG – instead of talking about Nicki’s song??

Oh, and it’s not like Cardi’s the ONLY female artist turning down tracks. Remember that Nicki Minaj turned down No Limit and Cardi subsequently hopped on the track.

But obviously there’s a ton of bad blood between the two ladies.

You’ll recall that Nicki and Cardi actually had a physical altercation last year. The two had been going back and forth on social media – and Cardi PULLED UP on Nicki and her BFF at NY Fashion Week.

Nicki’s friend Rah Digga then put hands on Cardi, and left her with a giant lump on her forehead.