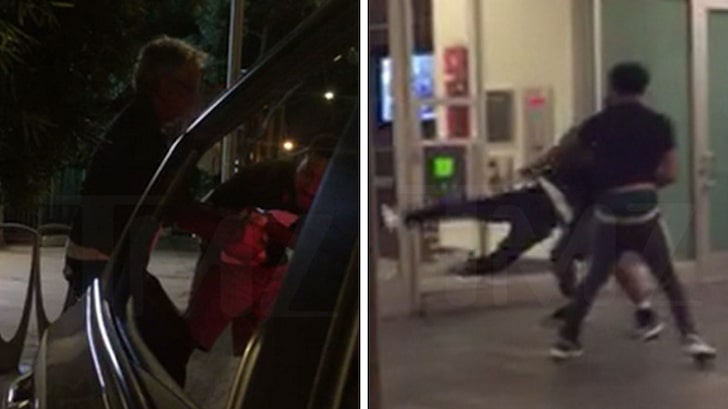 Andy Dick got his ass handed to him after allegedly picking a fight with an Uber Eats delivery man … and adding insult to injury, he’s now a suspect in a battery investigation.

Ya gotta see the video of the wild street fight … Andy’s fighting with the delivery guy when another man comes up from behind, grabs Andy above the shoulders, lifts him up and ragdolls him to the ground.

The worst part … Andy’s head slamming against the pavement.

Folks who were there tell us Andy started the beef when he attempted to wrestle some food away from the delivery guy … and in the video you hear Andy telling the dude, “It’s my food now, bitch!”

After a brief struggle, Andy walks away … but when he returns, he catches the beatdown of a lifetime. The guy who body slammed Andy claims Dick spit on his friend, and in the video you see Andy trying to grab and slap the guy.

Andy tells TMZ … he did NOT spit on anyone and he claims the group offered him some tacos, and when he reached to get them they pulled the plate away. He says the next thing he knew, he was being tackled from behind.

Dick also tells us he’s thinking about going to cops to file his own police report.

It’s just the latest episode involving Andy and Uber workers … as we first reported, there’s an active warrant out for Dick’s arrest stemming from an April 2018 incident when he allegedly groped his Uber driver.

As for the food at the center of the fight … we’re told it had to be thrown away.