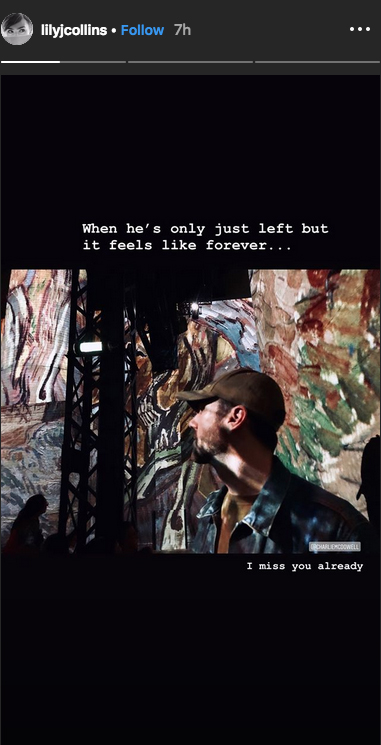 Lily confirmed their relationship with a pic of herself leaning on Charlie, whose face is not shown. She wrote, “Always got your back…”

While she didn’t tag him in the pic, Collins made sure to tag him in an Instagram Story pic. Along a pic of Charlie looking outside, she wrote, “When he’s only just left but it feels like forever…I miss you already.”

Over the weekend, Charlie also posted a pic of a smiling Lily in Paris, where she is currently filming her movie “Emily.”

Last month, Lily and Charlie sparked romance rumors after they were spotted cozying up to each other during a stroll in Los Angeles, in photos obtained by DailyMail.com.

Lily and Charlie definitely have one thing in common — they both have very famous parents. Lily’s father is singer Phil Collins, while his parents are Malcolm McDowell and actress Mary Steenburgen.

Last year, Emilia posted a pic of one shadow kissing another shadow on the cheek. She wrote on Instagram, “Well that was a birthday I won’t be forgetting in a while.”