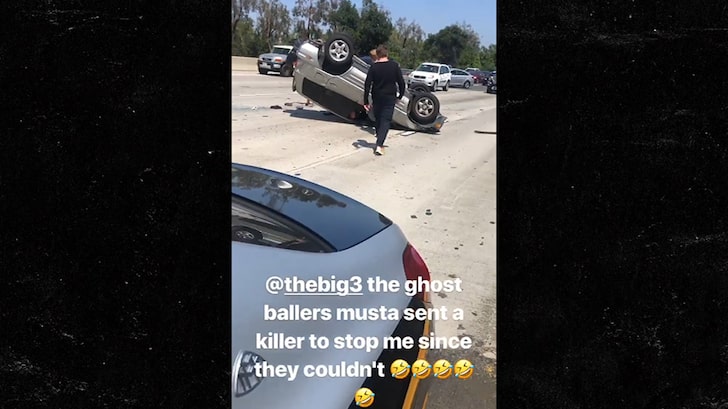 Ex-NBA star Gilbert Arenas was involved in a WILD car crash over the weekend — where a Toyota flipped on its head — but TMZ Sports has learned, miraculously, nobody was seriously hurt.

We’re told a RAV4 collided with Arenas’ pricey Maybach at around 2:55 PM on the 101 freeway in Encino, California on Sunday.

The RAV4 appeared to brush up on Arenas’ rear quarter panel before it rolled onto its head … and the footage of the aftermath is crazy.

You can see the mangled Toyota lying wrongside up in the middle of the freeway — with Arenas’ supercar severely dented in the back.

Fortunately for everyone involved, we’re told there were only minor injuries suffered — with Arenas not even listed as hurt.

For his part, Gilbert seemed to joke about the whole ordeal on social media afterward, saying, “@thebig3 the ghost ballers musta sent a killer to stop me since they couldn’t.”

FYI, Gilbert — who now plays in the BIG3 for the Enemies — beat up on the Ghost Ballers the day before the accident, droppin’ 12 points in a 51-35 win in Alabama.