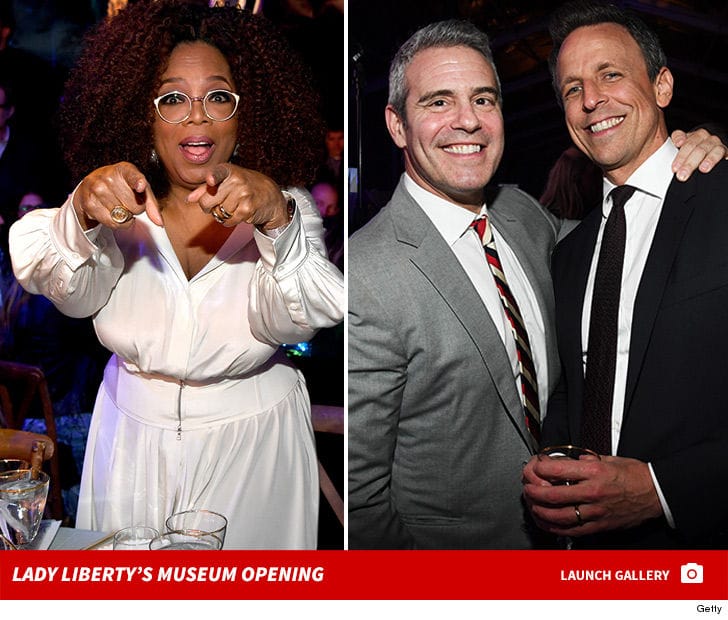 Oprah, Andy Cohen and Seth Meyers were just some of the slew of celebs who made their way to Liberty Island Wednesday night for the opening of the Statue of Liberty Museum.

The parade of stars was pretty incredible … from Gayle King, Tony Bennett, Jeff Bezos and David Letterman to Hillary Clinton and her pregnant daughter, Chelsea, the stars were all out in full effect for an occasion that, tbh, has long been overdue.

As you know … the Statue of Liberty draws millions for an up-close look at Lady Liberty but since 9/11, security’s been incredibly tight and visitors have been restricted from visiting inside the statue.

Enter the State of Liberty-Ellis Island Foundation … which poured $100M over 2 years to build a museum where visitors will learn about how the French made the 150-foot-tall gift to ‘Merica.

There’s also the original torch that was on the Statue when it opened in 1886. It was replaced in the 1980s.

Enough U.S. history … check out the pics ’cause there are some serious meetings of the minds happening … with Hillary at the center of it all. BTW … Tony Bennett and Gloria Estefan performed and Oprah was awarded with the Inaugural Statue of Liberty-Ellis Island Award. Awesome night!!!