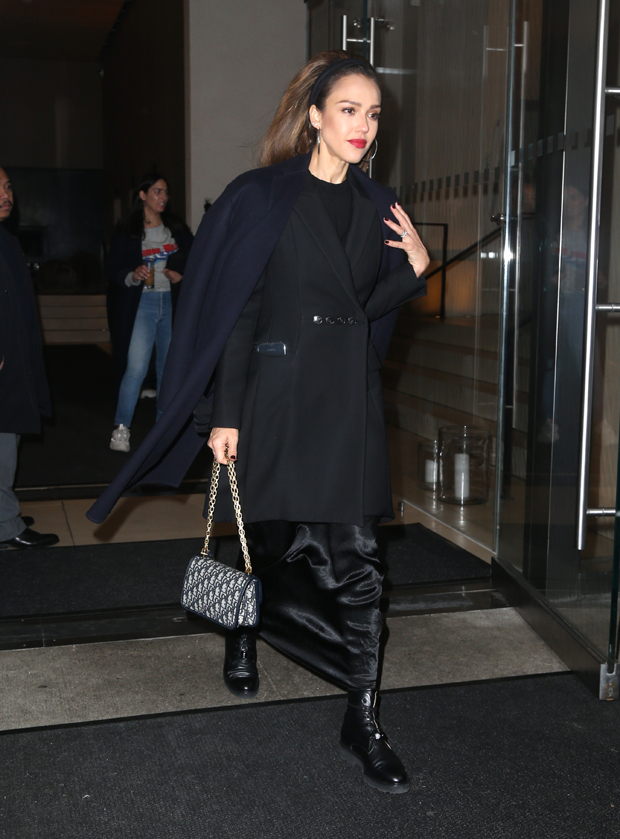 Jessica Alba stepped out to promote her new series ‘L.A.’s Finest’ in New York City on the morning of May 14 and she looked absolutely gorgeous in a silky black ensemble and red lipstick.

Jessica Alba, 38, proved she can look radiant even if it’s super early in the morning! The actress was on her way to an appearance on Live with Kelly and Ryan in New York City on May 14, and she was all dolled up and looking her best. Jessica, who wore bright red lipstick, showed off a sleek hair style that had her long light brown locks slicked back by a black headband as she wore a black wool coat over a black top and a long silky skirt bottom. She also wore an open navy blue wool coat draped over her shoulders and black combat boots.

Jessica was up early to promote her new television series L.A.’s Finest, which premiere on May 13. The cop drama, which premiered on Charter’s Spectrum, co-stars Gabrielle Union, and is a spinoff of Gabrielle’s character, Drug Enforcement Agent Sydney Burnett, from the Bad Boy film franchise. Jessica plays the role of Nancy McKenna, a working mom who is paired with Sydney in her quest as an LAPD detective, and the two take on some of the most dangerous criminals in the city.

When Jessica’s not impressing her fans with her acting, she’s embracing her time as a mom-of-three. She gave birth to her third child with husband Cash Warren, a son, Hayes, in Dec. 2017. The couple also have daughters, Honor, 10, and Haven, 7. She often post adorable pics of her little ones on her Instagram account and gushes about being a mother.

In a sweet Mother’s Day post on May 12, Jessica wrote some heartwarming words about her children. “My heart burst open the moment I became a mom almost 11 years ago. I became a soft, vulnerable, open women -fully comfortable in myself knowing that I’m far from perfect but I always try to do my best -my kiddos are my #1,” her post read.