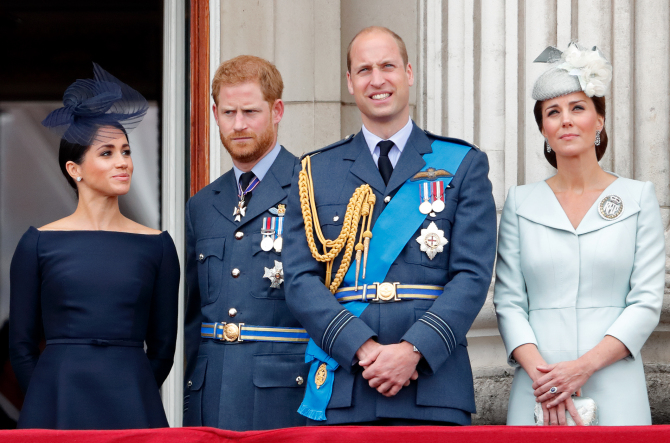 We let you celebrate the arrival of Baby Archie Harrison, but we didn’t forget about those royal cheating rumors. Last month, shit hit the fan when reports swirled that Prince William allegedly cheated on Duchess Kate Middleton. But, did Prince Harry have a clue about Prince William cheating with Rose Hansbury? Along with the affair rumors, there were brewing stories that a feud between Prince William and Prince Harry was also heating up. Though most folks thought the rift between the brothers was years in the making–other royal fans believe it has a lot to do with Prince William possibly stepping out on Kate. So what’s the truth?

Things have been rocky between Prince Harry and Prince William lately. Apparently, their bromance started to fracture back in 2016 when the new-dad introduced Meghan Markle to his family. From day one, Archie’s dad was head over heels for Markle, but Wils wasn’t so convinced about the actress’ intentions. In a big brotherly way, he pulled Harry aside to discuss his reservations and Prince Harry lost it. According to Daily Mail, “Harry went mental and accused his brother of trying to finish their relationship before it had started.”

When Meghan Markle and Kate Middleton didn’t become fast friends like Prince Harry had hoped, and the Sussexes split their household from the Cambridges–the divide between the brothers only widened. Then came all of this affair drama. If you’ve been falling the British Royal family at all, you know that Prince Harry adores his sister-in-law, Kate Middleton. Journalist Nicole Cliffe is convinced that Wils confided in Harry about his affair with Rose Hanbury and Harry wasn’t having it. She tweeted, “Wills would absolutely have told Harry about the affair, And I think that Harry was like ‘this is exactly what ruined our childhoods.” Cliffe also believes that the Cambridges and Rose Hanbury are up in arms and threatening legal action over the affair reports because there is some truth to these allegations.  SIPS TEA.

There is no clear evidence about what actually happened between Prince William and Rose Hansbury–including whether it was an on-going affair, a “one-time thing,” or if it even happened at all. However, we do know that with Prince William’s somewhat sordid history with other women and Prince Harry’s adoration for Kate, the Duke of Sussex would have tried to knock some sense into his big bro.

For now, the brothers are back on better footing these days (thanks to Kate Middleton), and Prince William and Kate Middleton don’t seem (outwardly) phased by these cheating rumors. However, as we’ve seen from past royal scandals and mess, the truth always surfaces in the end.