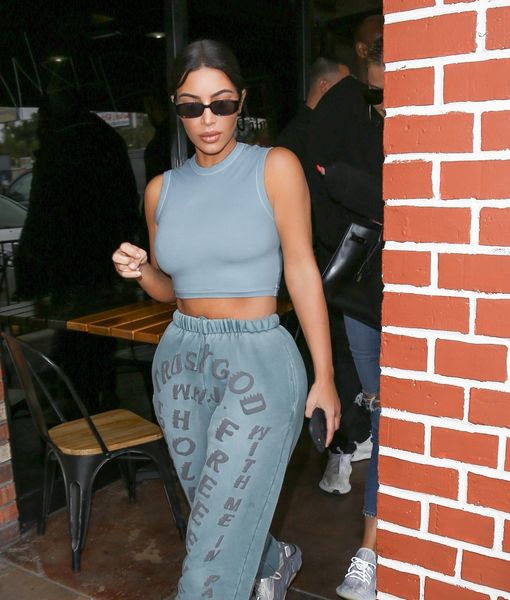 On the latest episode of “The Ellen DeGeneres Show,” Kim’s sister Kourtney revealed that Kim’s surrogate was in labor with her fourth child, which is why Kim couldn’t be there. She shared, “My mom doesn’t even know this, but Kim’s surrogate went into labor. So she’s at the hospital.”

Kris, who was a guest on Ellen’s annual Mother’s Day show, responded, “No! What are we doing here?! C’mon, Ellen.”

During the special, Kris opened up about her experiences being pregnant and revealed that she helped deliver grandchildren Stormi and True. Ellen gifted her scrubs, just in case she has to help deliver her next grandchild.

On Thursday, Kim was seen baring her midriff while picking up milkshakes from BurgerIM in Calabasas. Her BFF Jonathan Cheban recently debuted his signature burger at the chain.

Earlier this week, Kim shut down rumors that her surrogate had already given birth. She tweeted, “Wait just saw news our baby boy came but that’s not true! It’s Met Monday, I’m in NYC. I would be at the hospital lol.”

Rumors started swirling that Kim’s surrogate gave birth after Kim posted a morning text message from Kanye, who wrote, “This is your life. Married with four kids, get people out of jail, cover of Vogue, go to church every week with your family. Dreams come true.”

Last month, Kim threw a wellness and CBD-themed baby shower to celebrate her baby’s arrival. Guests enjoyed a sound bath, Yeezy slides, meditation, and CBD experiences. She shared, “I thought it was kind of ridiculous to have a fourth baby shower. But I thought I’m freaking the f**k out having a fourth kid. So, because I’m freaking out and the baby is coming in, like, two weeks, I thought what better way to celebrate than to have a little CBD.”

A few weeks ago, Kim revealed what name she was seriously considering for her baby boy. She told Jimmy Kimmel, “I was truthfully thinking about naming him Rob, after my brother Rob. But then it’s like North, Saint, Chicago, Rob. It doesn’t really go, but that’s the one name I was really feeling and my brother approved it.”

Along with “Googling Armenian boys’ names,” Kim noted that she also asks her family to “weigh in” on possible baby names. She added, “I definitely take a family survey, but it’s usually after the baby is born. We’re trying to figure out what the baby looks like. I usually go about three or four days nameless until I feel like it really connects with the baby.”

In February, Kim revealed her parenting secret to “Extra’s” Renee Bargh. Stressing the importance of sleep, she shared, “I do sleep, that’s my thing. When I’m putting the kids to bed, half the time I fall asleep with them. I get up an hour later and then go downstairs. I make it my mission to be really focused. I go to bed really early.”

Kardashian continued, “I wake up at 5:45 every day, work out, get the kids ready for school, school drop off, come home, work all day — same routine over again.”

Earlier last year, Kim’s surrogate La’Reina Haynes was revealed on an episode of “Keeping Up with the Kardashians.” Haynes carried Kim and Kanye’s third child, Chicago.

A source told People magazine, “They hoped to work with the same gestational carrier, but it didn’t work out this time. They are working with a second carrier now that is pregnant and will give birth in the spring.”