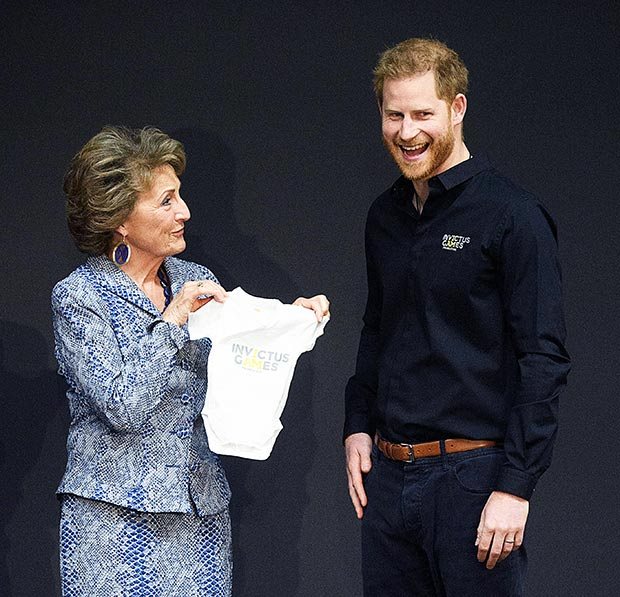 New dad Prince Harry is already receiving gifts for his baby son Archie and the royal couldn’t look happier about it. The redhead was beaming from ear-to-ear during an official trip to the Netherlands.

Prince Harry, 34, was given a special Invictus Games onesie for his 3-day-old son Archie during a visit to the Netherlands on May 9. The new dad looked delighted with the gift, which was presented to him by Princess Margriet, 73, at a special event to launch the countdown to the fifth Invictus Games, which will take place at The Hague in 2020.

Harry left his newborn son and wife Meghan, the Duchess of Sussex, 37, behind for the short trip from the U.K. to kick off the countdown to the sports event for wounded soldiers, which he created. Before he gave a speech to the waiting crowd he was given the cute onesie and even joked about putting it on.

Photos taken at the event were later posted on the Instagram page that Harry, the Duke of Sussex, shares with his wife of nearly a year. “Sport has the power to help people physically and psychologically,” the caption to the pics partly read. “Our mental fitness is the key, because without it we fail to operate efficiently; but with it your physical performance and potential are exponentially improved and we have witnessed this over and over again.”

Just a day earlier, on May 8, Prince Harry was in Windsor in the U.K. with Meghan as they introduced their firstborn to the world during a special press conference. Harry cradled his son as they spoke about their delight at having their very own “bundle of joy.” Archie arrived just under two weeks before his parents’ first wedding anniversary on May 19. Within hours of showing off their son to the world, Meghan and Harry revealed that his full name is Archie Harrison Mountbatten-Windsor.

After the press conference little Archie was introduced to his great-grandmother Queen Elizabeth II, 93, who broke into a smile as she, her husband Prince Philip, 97, and Meghan’s mom Doria Ragland, 62, looked on. The little boy is the British monarch’s eighth great-grandchild.