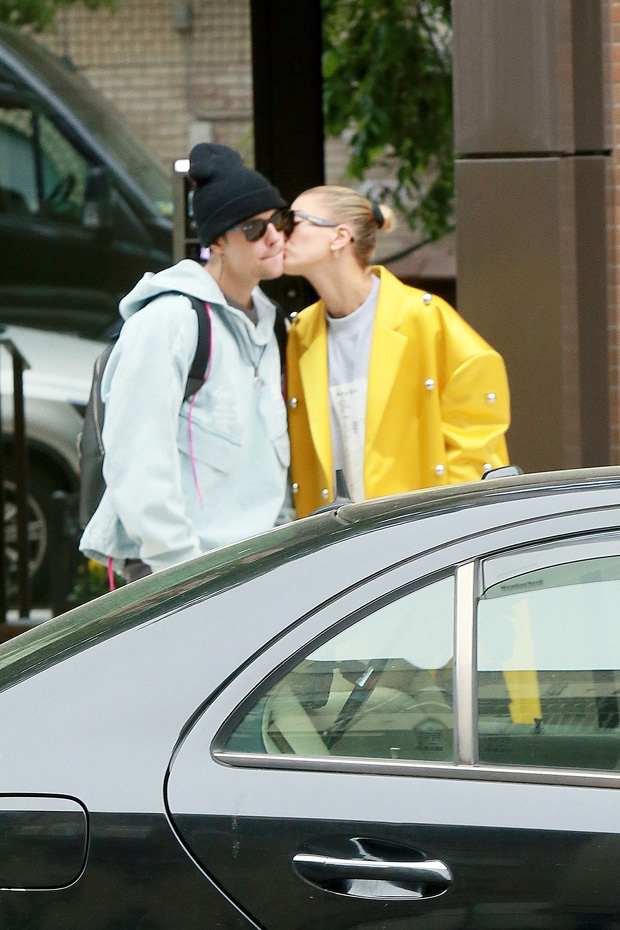 A congratulatory smooch? Hailey Baldwin planted a loving kiss on Justin Bieber just hours before his collaboration with Ed Sheeran, ‘I Don’t Care,’ debuts at midnight on May 10.

Another day, another excuse to kiss in public for newlyweds Hailey Baldwin, 22, and Justin Bieber, 25. The lovers were spotted leaving a New York City hotel on May 9, and before going their separate ways, Justin leaned in for a kiss — which Hailey happily provided, right on his cheek. The intimacy wasn’t hard to miss, as Hailey’s bright canary coat served as a beacon for the PDA moment and curious onlookers. Meanwhile, Justin was dressed in a much more incognito outfit in a black hoodie, sunglasses and a pastel blue hoodie.

Despite the Biebs’ casual attire, big things are coming in just a few hours. His long-awaited collaboration track with Ed Sheeran, “I Don’t Care,” drops at the stroke of midnight on May 10. Despite the song’s name, fans care very much — it’s the pop stars’ first big effort in four years, since the 2015 release of “Love Yourself” (well, aside from the lines they contributed to Lil Dicky’s celebrity-packed song, “Earth,” in April 2019). The collab also marks Justin’s comeback to music, since it’ll be his first track as a lead singer since 2017’s “Friends” with BloodPop. Even Justin’s pumped.

“I HAVE NEVER SEEN JUSTIN BIEBER MORE EXCITED FOR A SONG RELEASE THAN I HAVE WITH HIM AND ED SHEERANS NEW SONG Y’ALL KNOW IT’S ABOUT TO BE ICONIC,” one fan pointed out via Twitter, and it’s true — the “Sorry” singer shared green screen photos of him and Ed to Instagram on April 30, which his music partner proceeded to Photoshop into that iconic prom pose. Justin took this a step further by editing a baby-faced JB onto Ed’s body for his Instagram Story, writing, “Less than 12 hours until we combine.” We’re ready for the fusion, and so are fans who already listened to a snippet of the new song on May 7. “I don’t care by Ed Sherman & Justin Bieber is already my favorite song,” one fan tweeted, while another noted something interesting: “Reminder this is Justin Bieber’s first song as a married man.”

It’s great to see where Hailey and Justin are meant to be — by one another’s sides! That wasn’t the case at the 2019 Met Gala on May 6, which Hailey attended stag. Not to worry, as these two are still going strong since their courthouse nuptials in Sept. 2018. “Justin is not a fan of the Met Gala,” a source close to Justin EXCLUSIVELY told HollywoodLife. Yes, Justin thought Hailey “looked incredible,” but he’d “rather let Hailey have all the attention on the night and experience all the glory from it because she actually likes the grandeur of it all.”