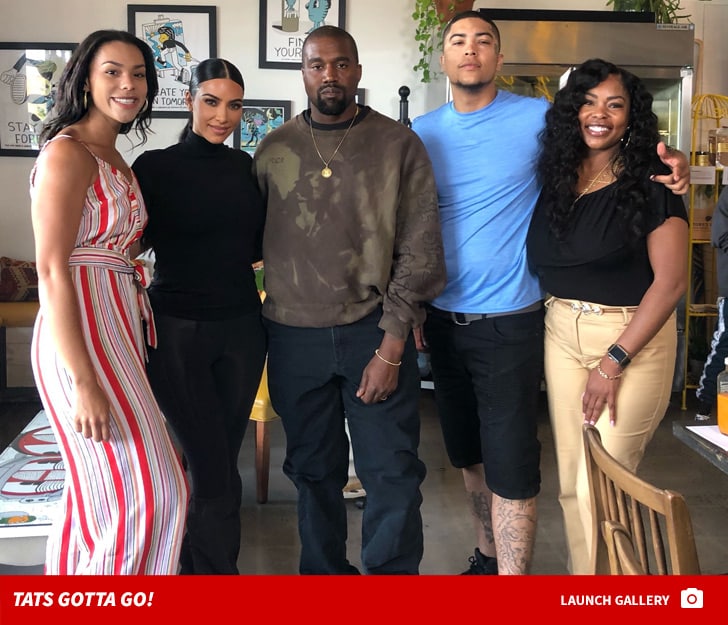 Tattoo Removal On Me!!!

Kim Kardashian is making house calls to some of the inmates she’s recently helped free — as one of them in North Carolina just discovered — and she’s pitching in to get their lives back on track.

This is pretty incredible — Azaria Algarin‘s twin brother, Paul, got out of Central Prison in North Carolina on April 19 after serving 7 years, but while he was locked up he asked for Kim’s address so he could send her a letter because he’d heard of the prison reform work she’s been doing.

Azaria says she thought her bro was being ridiculous and it was a pipe dream that Kim would even read his letter, let alone respond. Turns out she did … with a personal visit to meet him and his family.

Kim and Kanye West flew to Charlotte Tuesday — the day after attending NYC’s Met Gala — to meet Paul, Azaria and their mom. She also brought a doctor to discuss removing Paul’s face tattoos so he can have a fresh start post-incarceration. Kim and Kanye are covering the cost for the procedure.

Azaria’s floored by the gesture, saying … “Never in a million years did I think Kim would write him back (or even read his letter), fly in right after the met gala (not to mention her 4th baby is due at any minute), invest in our family & laugh / relate to us over the smallest things.”

Azaria tells TMZ the group had lunch at The Lights Juicery & Cafe, then went to MedSpa nearby for Paul’s first lasering session to remove his facial ink.

She says … “I’m so proud of my brother for taking steps in the right direction,” and she’s grateful for Kim’s involvement in “such a special day that I will forever cherish.”

As we’ve told you, Kim’s more popular than ever with prisoners and their families thanks to helping 17 inmates gain freedom over the last 3 months.