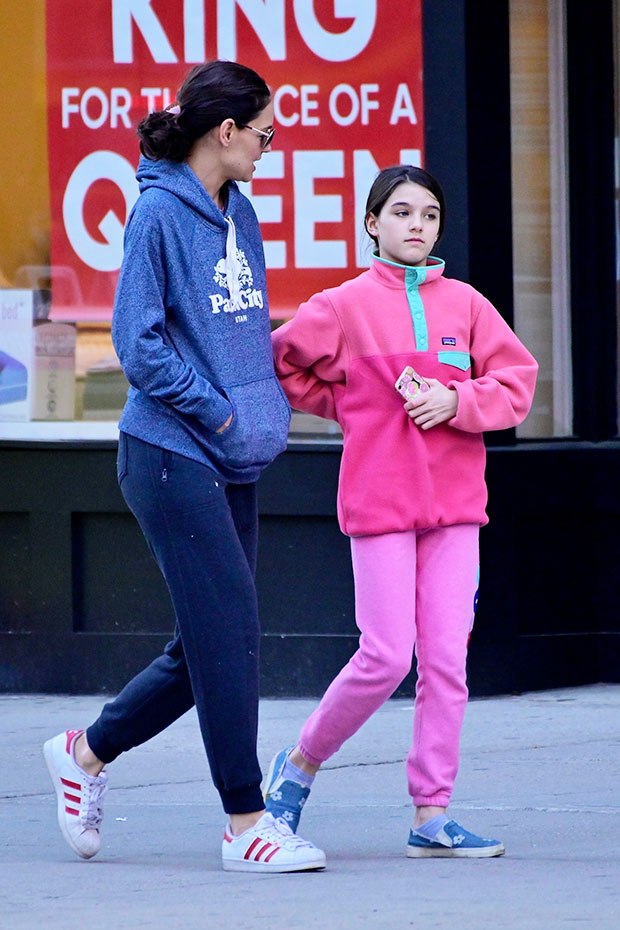 Katie Holmes was all glammed up at the 2019 Met Gala but the next day, she kept it casual in in a hooded sweatshirt as she stepped out in the big apple with Suri Cruise.

It looks like after an eventful night at the Met Gala, Katie Holmes, 40, was in need of a casual day with her 13-year-old daughter, Suri. The mother-daughter duo stepped out in New York on May 7, and both ladies looked happy and relaxed as they sported sweatpants. Katie wore a navy hoodie with matching sweats, while her teenage daughter strolled the streets in an all pink ensemble. The two sweetly spent some quality time together as they ran errands around the city.

The casual outing comes one day after Katie got all dolled up for a glamorous night out at the 2019 Met Ball. The actress stunned on the red carpet that night, but even more notably, she reached a new milestone in her romance with Jamie Foxx, arriving with him on her arm. The appearance at the high-profile event marked their most public date yet. The lovebirds arrived together, but later separated on the pink carpet. However, once inside, they reconvened and even sweetly posed for photos together. Later on in the night, they were snapped jamming out together in a limo, and it appears these two aren’t doing much to hide their romance anymore!

While breakup rumors swirled around Katie and Jamie earlier this year, it appears that couldn’t be further from the truth. In fact, a source close to the Django Unchained star EXCLUSIVELY told HollywoodLife, “The rumors of a breakup and Jamie being single were very overblown.” Despite Jamie claiming to be “single” at Byron Allen’s Oscars after-party on Feb. 24, that’s just something he and Katie say for privacy. “They have been secret with their relationship for so long and that is what works for both of them,” our source explained.

We love that Katie and Suri looked like the best of pals as they hit the streets of New York. The actress is undoubtedly one cool momma. Last time we saw her step out with her daughter, it was to treat her and a bunch of friends to Katz’s Delicatessen deli in Soho. Parenting goals!