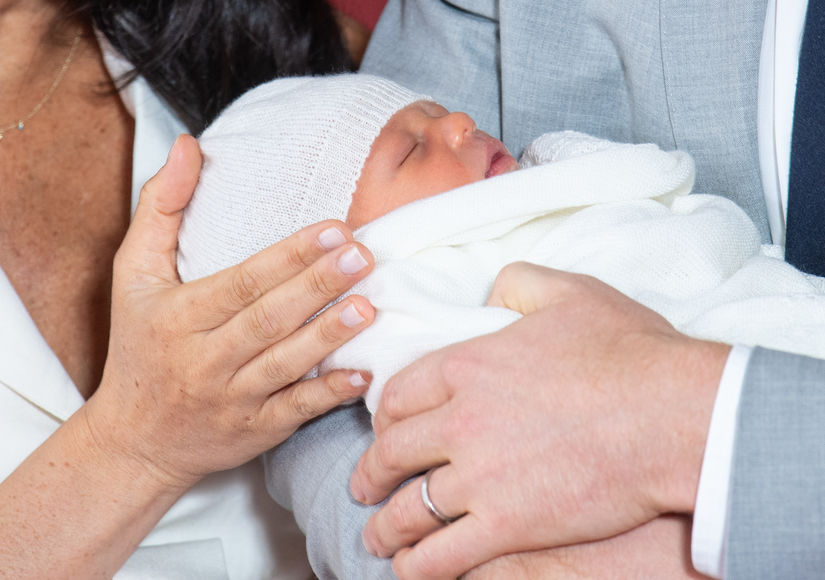 On Wednesday, Harry and Meghan showed off their baby at Windsor Castle. Meghan told reporters, “It’s magic. It’s pretty amazing. I have two of the best guys in the world, so I’m really happy.”

Of their bundle of joy, Meghan added, “He has the sweetest temperament… he’s just been the dream. It’s been a special couple of days.”

When asked who he looks like, Harry commented, “Everybody says the baby changes so much over two weeks. We’re monitoring how the changing process happens over this month really. His looks change every single day.”

Along with saying parenting is “amazing,” Harry added, “We’re just so thrilled to have our own bundle of joy and being able to spend some precious times with him as he slowly starts to grow up.”

The couple have not revealed his name yet.

The Duke and Duchess of Sussex chose to break royal tradition by skipping the photo op outside the hospital in which he was born. Instead, they wanted to make the announcement on their own terms, after celebrating privately as a family.

On Monday, the couple announced they had welcomed a baby boy, who weighed 7 lbs. 3 oz.

“The Duchess and baby are both healthy and well, and the couple thank members of the public for their shared excitement and support during this very special time in their lives,” they wrote on Instagram.

After Meghan gave birth, Harry told reporters in Windsor, “I’m very excited to announce that Meghan and myself had a baby boy early this morning, a very healthy boy. Mother and baby are doing incredibly well. It’s been the most amazing experience I can ever possibly imagine, how any woman does what they do is beyond comprehension. But we’re both absolutely thrilled and so grateful to all the love and support from everybody out there. It’s been, it’s been amazing and so we just wanted to share this with everybody.”

When asked about their son’s name, Harry said, “Still thinking about names. The baby is a little bit overdue. So we’ve had a little bit time to think about it but yeah, that’s the next bit.”

He hinted at when the Prince would make his debut, saying, “For us, I think we’ll be seeing you guys in probably two days time, as planned, as a family to be able to share it with you guys and so everyone can see the baby.”

Harry made sure to praise Meghan, sharing, “I haven’t been in many births. This is definitely my first birth, it was amazing. Absolutely incredible. As I said, I’m so incredibly proud of my wife and as every father and parent would ever say, you know, your baby is absolutely amazing. But this little thing is absolutely to die for. So I’m just over the moon. Thank you very muc, guys. Thank you.”

Buckingham Palace revealed that the royal family has been notified, saying, “The Queen, the Duke of Edinburgh, the Prince of Wales, the Duchess of Cornwall, the Duke and Duchess of Cambridge, Lady Jane Fellowes, Lady Sarah McCorquodale and Earl Spencer have been informed and are delighted with the news.”

The statement continued, “The Duchess’s mother, Doria Ragland, who is overjoyed by the arrival of her first grandchild, is with their Royal Highnesses at Frogmore Cottage.”

Meghan’s dad Thomas Markle also released his own statement about the baby’s arrival. He told The Sun, “I’m delighted to hear that mother and child are doing well. I am proud that my new grandson is born into the British royal family and I am sure that he will grow up to serve the crown and the people of Britain with grace, dignity, and honour.”

Thomas added, “GOD bless the child and I wish him health and happiness, and my congratulations to my lovely daughter Duchess Meghan and Prince Harry, and GOD save the Queen.”