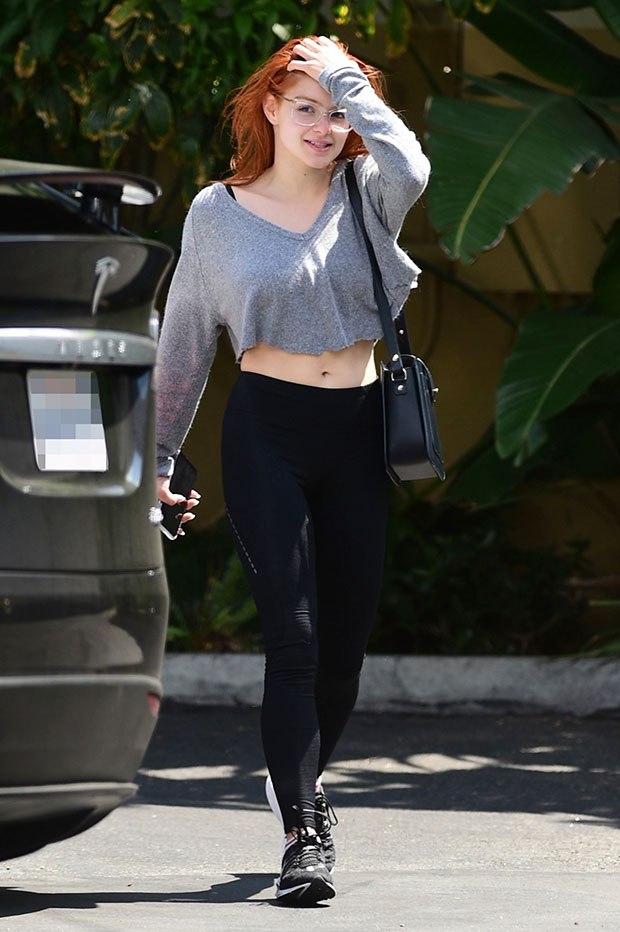 Ariel Winter flaunted her amazing abs when she stepped out for a lunch date in West Hollywood with her boyfriend Levi Meaden on May 6.

Ariel Winter, 21, was all smiles when she flaunted her newly colored red hair while also showing off her toned body during a lunch date with boyfriend Levi Meaden, 31, in West Hollywood, CA on May 6. The Modern Family actress looked amazing in a long-sleeved gray crop top that revealed her fit abs and black leggings during the outing. She also wore clear framed glasses and sneakers to top off the casually cool look.

All eyes have been on Ariel ever since she debuted her red hair last week and we have to admit, it’s definitely working for her! The young star seemed to compare herself to Ariel from Disney’s The Little Mermaid, when she took to social media on May 3 to share a pic of her hairstyle along with an added quote of a song from the film. “🧜🏻‍♀️ part of yourrrrrr worrrrrld 🧜🏻‍♀️,” the quote read.

In addition to her latest outing, Ariel showed off her red hair and flattering figure immediately after getting the color change done while leaving Nine Zero Salon. She wore a black short-sleeved top that tied in the front and tight jeans with matching knee-high boots and of course, she looked equally as incredible as her most recent lunch date.

In an EXCLUSIVE interview with HollywoodLife, Ariel’s hairstylist, Tabitha Duenas, who helped her get her red hair, opened up about how the process took a long seven hours to transform Ariel’s previous dark black locks into the lighter ones she has now. She also explained why the talented influencer made the decision to do the color change. “Ariel is young and likes to change,” she said. “She knows what she likes. It’s fun to work with her.”