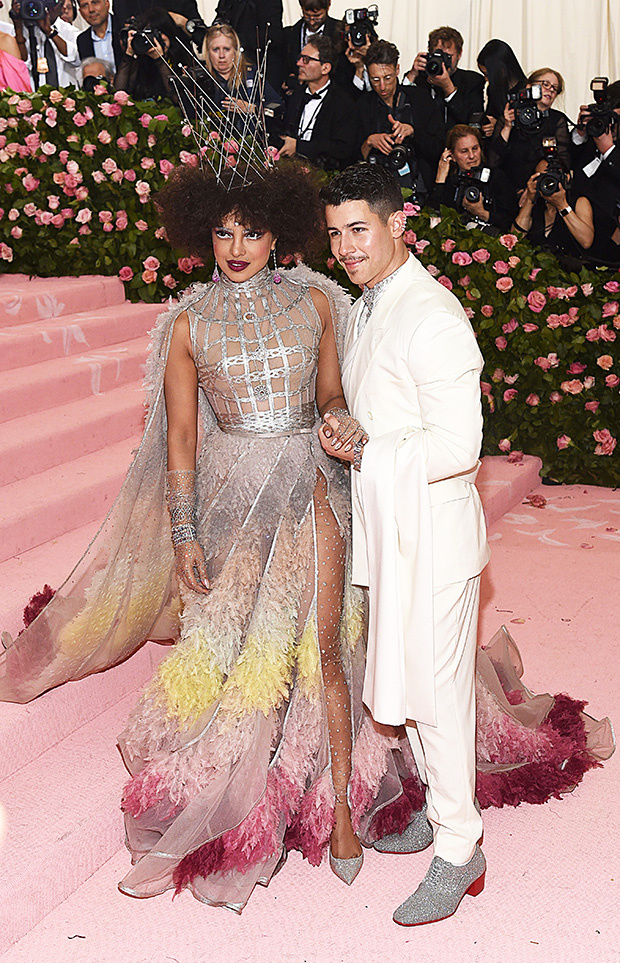 Just two years after attending the Met Gala together as ‘friends,’ Priyanka Chopra & Nick Jonas have returned as a married couple!

Priyanka Chopra and Nick Jonas have arrived to the Met Gala as a married couple! The pair were picture perfect on the pink carpet, rocking the Camp theme to a T! Nick wore a white suit with the addition of a wild mustache above his lip and several earrings. Priyanka went for the ‘extra’ theme like she was out of a fairytale book, with a cape, over the top makeup, decorated hands and sequined pantyhose. Her gown featured a silver-and-mesh, see-through, corset-like top with a draping skirt decorated in feathers. Priyanka’s hair was poofy with a high crown on top, like the queen she is! It’s like this duo just walked out of the music video for “Sucker!” Oh, wait…

Priyanka and Nick first sent fans into a frenzy that their was a romance brewing in 2017 at the Met Gala when they attended together. Little did fans know the pair had been exchanging flirty messages for months, but their relationship didn’t start for another year! At the time, Priyanka told Jimmy Kimmel of their Met outing, “We were both wearing Ralph Lauren, and we decided to go together, and it was fun.” Flash forward to May 2018, the two were inseparable and engaged by the end of July. Tonight, they both are wearing Ralph Lauren, again, and Nick calls it a ‘full circle moment.’

“To be honest, I’m very excited, I love the Met Gala, it’s always a fun night, but Priyanka will set the tone, and I’m just going to be there to support her,” Nick told ET at the UglyDolls premiere. “So, I plan to keep it simple and let her shine.” The former Quantico star looked back at the 2017 Met Gala on her IG, posting a sweet message on a picture of she and Nick. “The story I’ll definitely tell our future kids… How I met your father,” she wrote on the photo. So sweet!