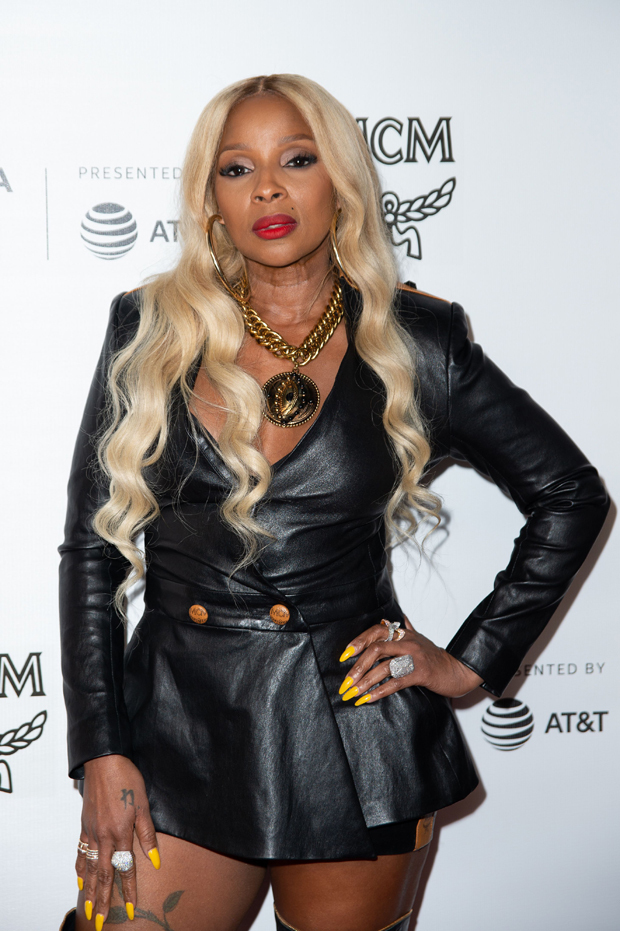 Mary J. Blige was a gorgeous sight to see when she rocked a black leather blazer style mini dress at the premiere of ‘The Remix: Hip Hop X Fashion’ at the Tribeca Film Festival in New York on May 2.

Mary J. Blige, 48, was looking half her age when she stepped out in a sexy fashion choice during the Tribeca Film Festival in New York on May 2. The blonde singer wore a tight figure-flattering black leather blazer style mini dress and matching black boots when she attended the festival’s premiere of The Remix: Hip Hop X Fashion documentary and she was absolutely sizzling! The beauty accessorized with a thick gold-colored necklace and large matching hoop earrings, making her one of the best dressed stars of the night. Mary revealed on her Instagram that her amazing dress was a custom piece by fashion designer Misa Hylton.

Misa is the focus of the new documentary Mary and many other celebs came out to support at the festival. She designed Lil’ Kim‘s famous purple jumpsuit that she wore with a pasty at the 1999 MTV Video Music Awards and the documentary sheds light on Misa’s impact in urban fashion throughout the years. Misa has teamed up with creative partner MCM to create her recent fashion pieces and many of the celebs wore outfits from the collaborative line that night. In addition to Mary, Lil’ Kim showed up to the premiere to support Misa and this time, she wore a pink and black MCM jumpsuit that made a lasting impression.

Although Mary and Lil’ Kim are Misa’s most notable celeb clients, other celebs that showed up to support the talented designer included Cardi B‘s sister, Hennessy Carolina, Roxanne Shanty, and Bevy Smith. Lil’ Kim surprised attendees to a mini concert after the documentary screening, proving that she’s still got it and will do whatever she can to show support for Misa.

The Tribeca Film Festival’s event on Thursday was just one of many events Mary has showed up to looking amazing. From the 2018 Academy Awards to her 2018 BET Awards performance, this lady knows how to choose fashion that will have everyone talking!