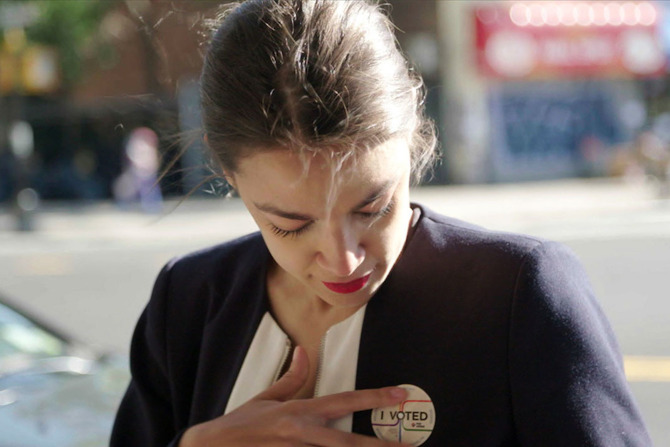 With Avengers: Endgame exploding in the theaters, and Game of Thrones keeping us all on edge —Netflix’s May 2019 slate is full of original content that is going to set our minds at ease. From following Alexandria Ocasio-Cortez’s meteoric rise in Knock Down the House to some of your favorite funny women in the new flick, Wine Country –the ladies are dominating Netflix in May both in front of and behind the camera.

In addition to the documentary and the comedy, a handful of other originals are coming off of the Netflix docket. They include Christina Applegate and Linda Cardellini’s black comedy series Dead to Me, the second season of the Dwanda Wise-led She’s Gotta Have It, and Ava DuVernay’s limited series When They See Us which centers the tragic story of the Central Park Five.

Here are a slew of female-centric movies and TV shows to watch on Netflix in May 2019.

Knock Down The House -May 1

2018 was a landmark year for women in politics. Across the United States, women rose up in unprecedented numbers to challenge the status quo and fight for a place in the government. Netflix’s documentary, Knock Down the House follows a coal miner’s daughter in West Virginia, a grieving mother in Nevada, a registered nurse in Missouri –and a whip-smart bartender from New York City named Alexandria Ocasio-Cortez. AOC’s race would become one of the most jaw-dropping political upsets in recent American history. We still haven’t recovered from this epicness.

Beloved actresses Christina Applegate and Linda Cardellini return to the small screen in the Netflix series, Dead to Me. The dark comedy follows Jen, a hotheaded widow (Applegate) desperately searching for the hit-and-run driver who killed her husband. Along her journey –Jen befriends Judy (Cardellini), an eccentric optimist who is harboring her own secret. We’re into it already.

Starring all of your favorite gals –Maya Rudolph, Tina Fey, Rachel Dratch, and Amy Poehler– Netflix’s comedy, Wine Country follows a group of longtime girlfriends who head to Napa to celebrate their friend’s 50th birthday. Unfortunately, past tensions hilariously threaten to boil over and leave the weekend in ruins. These ladies +wine =everything we love about comedies.

Based on Dete Meserve’s novel of the same name —Good Sam stars The Good Place actress Tiya Sircar as NYC TV news anchor –Kate Bradley. After uncovering a story about a good samaritan who leaves bags of money of strangers around New York –Kate breaks free from her bad news beat and maybe even finds love. We hope just hope she also gets a bag of money for herself.

Nola Darling and her men are back, and in Season 2 of She’s Gotta Have It they are getting out of Brooklyn. In the second season of the Dewanda Wise-led series helmed by Spike Lee –Nola is trying to figure out if she should remain true to her artistic roots or give in to the corporate world. We want ladies to get their money any way they can, so we’re down with whatever choice she makes.

Netflix has been changing the game when it comes to switching up old tired ass rom-com tropes, and they are in full effect with their latest romantic comedy-Always Be My Maybe. (Yes, it’s a play of off the iconic Mariah Carey song, and yes we’re living for it.)  Directed by Fresh Off the Boat producer –Nahnatchka Khan and starring Ali Wong and Randall Park –the duo portrays Sasha and Marcus respectively –two childhood friends who reconnect and maybe fall in love after fifteen years apart. The trailer is already perfect.

Helmed by prolific director Ava DuVernay–When They See Us is a searing mini-series about the Central Park Five. The series is based on the real-life Central Park jogger case from 1989 when a 28-year-old female jogger was attacked and raped in Central Park in New York City, leaving her in a coma for 12 days. Five innocent teens from Harlem were convicted of the crime in 1990. Fighting against the system their sentences were finally vacated in 2002 and in 2014 they sued New York City and were awarded $40 million.

If none of these peaks your interest, you can always watch Jamie and Claire fall in love on the first two seasons of Outlander which is set to begin streaming on May 27.

The Heat: A Kitchen (R)evolution
Queen of the South: Season 3

A Tale of Two Kitchens
One Night in Spring
The Flash: Season 5

After Maria
Alta Mar
Joy
Rim of the World
She’s Gotta Have It: Season 2
The Perfection
WHAT / IF

Disney’s The Nutcracker and the Four Realms

Chopsticks
My Week With Marilyn
Svaha: The Sixth Finger
The One I Love

Always Be My Maybe
Bad Blood: Season 2
Black Spot: Season 2
How to Sell Drugs Online (Fast)
Killer Ratings
When They See Us