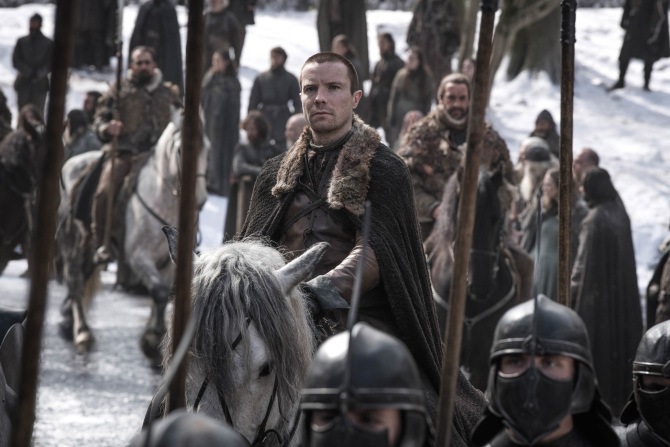 If there’s one thing we’ve learned thus far on Game of Thrones Season 8, it’s that anything can happen. In fact, our latest Game of Thrones theory puts Gendry on the Iron Throne. Jon Snow and Daenerys Targaryen seem like the most obvious contenders (and they’re certainly fighting hard for it), but what if there was a dark horse in this race? Assuming that Cersei Lannister is taken out of the running (hopefully in the most brutal way possible)–another contender could rise among the ashes. What if a character like Gendry actually has a better claim to the Iron Throne than Jon or Dany and chose to use it?

Though it doesn’t seem likely that Gendry would try to prove his claim to the throne –anything is possible in this song of ice and fire –especially if he happens to team up with the legend that is Arya Stark. Honestly, if we think about the pair of them together, they would be pretty unstoppable even against Dany’s dragons and what’s left of her Unsullied. We’ve uncovered some interesting Reddit posts that have planted this idea in our heads and we’re gonna unpack ’em and see if this could really be a thing.

Could Gendry really be Cersei’s son?

Two new Reddit posts remind us of one big question GoT has yet to answer: Who is Gendry’s mom? We already know he’s Robert Baratheon’s only surviving bastard (Robert had tons but his then-wife, Cersei Lannister made sure to eradicate them all — or so she thought — to ensure only her kids could succeed to the throne.) Therefore, we’ve never learned who Gendry’s mother actually was.

Reddit user u/AegonTargaryen- reminds us of two key things about Gendry’s mother. First, Gendry has no clear memory of her except that she had blonde hair. Second, Cersei lost a child before that evil golden-haired Joffrey came along, implying she and Robert had a child and it didn’t survive. Since we know Cersei can get tricky when it comes to pregnancies, it’s possible she lied about the child dying to protect her future children’s (the kids she had with her twin brother, Jamie Lannister) claims to the throne. Similarly, Reddit user u/ler___ reminds readers that in Season 1, Episode 2, Cersei makes mention of having a child with black hair who died. Since hair sometimes changes color after you’re born, and Gendry now has brown hair, who’s to say Cersei couldn’t be referring to Gendry? We admit — it’s a bit out there, but stranger things have happened on GoT. And, if Cersei was Gendry’s mother, it would strengthen his claim to the throne big time.

Okay, but bastards can’t be kings…right?

Bastard schmastard. In the past, being an illegitimate child has rarely boded well for someone’s future on GoT. Jon Snow, (although not really a bastard) grew up thinking he was the problem child and ended up going to The Wall to join the Night’s Watch before he was dubbed the King of the North. Ramsay Bolton was the bastard of Roose Bolton and basically had to become a sociopath in order to prove to his father that he was worthy enough to lead an army and preside over Winterfell. Being a bastard was essentially the pits.

Lately, GoT has made it clear that rules and prophecies can be bent and even broken –meaning anything is possible. Hell, a bastard could even lay claim to the Iron Throne. In past Season 8 episodes, we’ve seen Jaime Lannister cast aside patriarchal rules and knight Brienne of Tarth– even though she is a woman. During the Battle of Winterfell, Arya killed the Night King. With the show going away from its source material, who’s to say Gendry couldn’t throw his hat in the ring if he so chose?

Does Gendry even want the Iron Throne?

Well, that’s the big sticking point. To date, Gendry has made no mention of ever wanting the Iron Throne or even getting a formal title or position of power. He’s been pretty chill with contributing his skills as a blacksmith and fighter to Jon and Dany’s cause. He’s been laying low even though he and Jon are pretty friendly. It’s not exactly impossible that Gendry could get some big ideas about laying a claim to the throne, but it would be out of character.

Whether he’s Cersei’s son or not, Gendry’s parentage is reason enough to think he might be considered for some big role — maybe even king? — before this series ends. Keep an eye on this wild card character as you watch the final three episodes of GoT.