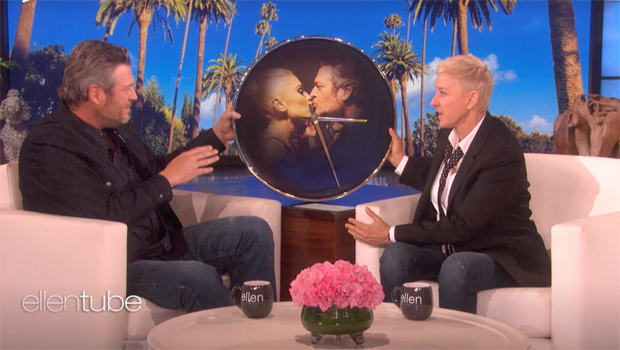 Ellen DeGeneres gifted Blake Shelton the same present that supposedly landed Jennifer Lopez a proposal in just one week. She even asked the country singer if he was going to marry Gwen Stefani, point-blank.

Ellen DeGeneres, 61, attempted to speed along a proposal between Blake Shelton, 42, and Gwen Stefani, 49, with a surprise present — and no, it wasn’t a Cheetos Christmas tree (her last gift). On the May 1 episode of The Ellen DeGeneres Show, the daytime host informed Blake that she’d be gifting him the same pre-engagement present she bestowed upon Jennifer Lopez, 49, in Feb. 2019. “So Jennifer Lopez was here last time and I wanted to help her out because she wanted to marry [A-Rod], obviously, like Gwen wants to marry you,” Ellen mused, which earned a hearty laugh from Blake.

Ellen had presented JLo a gigantic clock with her and A-Rod’s faces plastered on it, just to remind the retired MLB star that “time is passing” and whatnot. “So I gave her that clock and literally, like, a week later he proposed to her,” Ellen continued, which is true — JLo revealed that A-Rod finally popped the big question on March 9, just weeks after visiting Ellen’s show. With that successful track record, the talk show added, “So Mother’s Day is coming up, I have something for you to give [Gwen].” She proceeded to pull out another gigantic clock, this time with a picture of Blake and Gwen sharing a sweet smooch.

Blake saw the gift as an opportunity to reverse gender norms. “There’s a chance she’s gonna ask me to marry her, you’re saying, with this clock?” he asked Ellen, adding, “I flipped it around and put it on her.” Ellen let the “God’s Country” singer know that’s exactly what she intended. “So now that she knows that you’re waiting for her to ask, now that she sees this, she’ll ask you. I’ll call her — I’ll call her tonight,” Ellen assured, to which Blake exclaimed, “Please!” You hear that, Gwen?

Later in the interview, Ellen was more up-front and asked Blake, “Well, are you going to marry her?” Before he could answer the question, however, Modern Family star Julie Bowen popped out and gave him a scare. But Blake does indeed have “major plans to propose” when the timing is finally right, a source close to The Voice judge EXCLUSIVELY told HollywoodLife in Jan. 2019! The source added, “Blake and Gwen have definitely discussed marriage and how they would plan their wedding, but the fact that Gwen isn’t pressuring Blake one bit to rush into things only makes him want to marry her that much more.” The singers announced their romance in Nov. 2015.