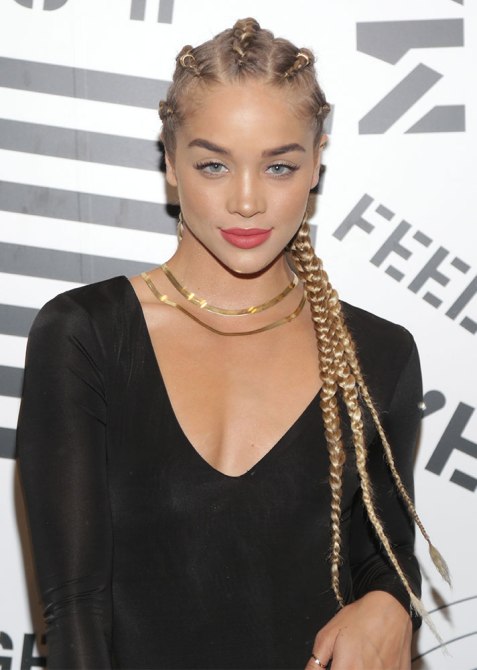 There are innumerable ways to fashion braids. You can double them up for French braids, twist them into tiny micros, or wear jumbo-size ones. But for black women, no style is more classic than cornrows. They’re a go-to style that suits various lengths and textures, and it’s one of the few hairstyles that’s been passed down through the generations.

And beyond its intricate beauty, the protective style is also a quick and convenient way to keep the hair tucked away when you need a break from daily manipulation. Of course, there are a few precautions to take before installing them, but when done correctly, cornrows are an easy slay that can be fashioned into plenty of different lengths, thicknesses, and patterns. If you’re low on inspo, check out some of our favorite celebrity cornrow looks ahead.

The model’s blonde cornrows were a red-carpet highlight at the 2018 Madeworn x Roc96 pop-up event.

At the 2014 Billboard Music Awards, Sparks looked gorgeous in a simple set of straight-back cornrows.

For the 2015 Angel Ball, the actress and singer rocked cornrows, pulled back into a bun at the nape of her neck.

The actress and singer opted for red-hot braids while visiting Hollywood Today Live in 2017.

At the 2015 BBC Music Awards, the Little Mix singer paired her vibrant green shadow with a trifecta of braids.

The actress tucked the ends of her tiny cornrows under a braided bun for the 2015 Screen Actor’s Guild Awards.

At Jingle Ball 2017, the singer showed off her brown locks in side-swept braids.

The “She’s Gotta Have It” star was a standout in this braided ‘do at the 2016 premiere for Barbershop: The Next Cut.

The former Spice Girl traded in her signature curls for straight-back cornrows at the 2016 premiere of Angry Birds.

In December 2016, the rapper rang in the New Year rocking waist-length cornrows, pulled up into a high ponytail.

For the 2017 Met Gala, the Loving star stunned in short, straight-back cornrows.

The Empire star’s medium-sized side-swept cornrows were a winning look at the 2017 NAACP Image Awards.

For the 2017 premiere of All Eyez on Me, the actress rocked a set of cornrows, varying in size and tucked at the nape of her neck.

For the 2017 American Music Awards, the actress pulled her micro cornrows back into a low ponytail.