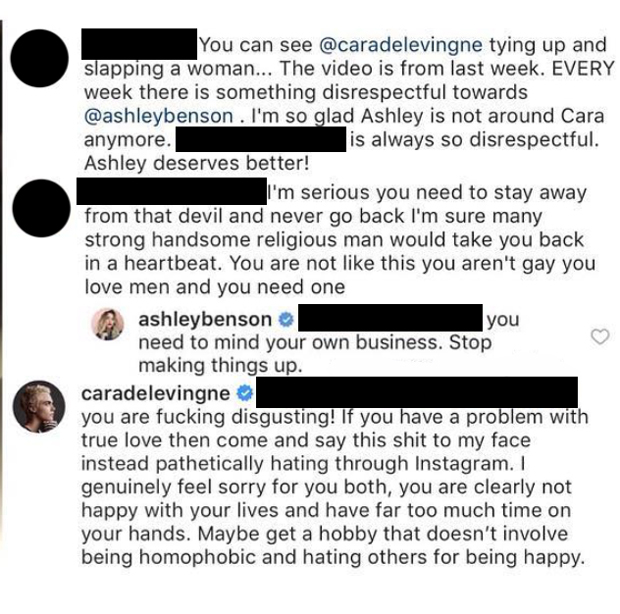 Ashley Benson and Cara Delevingne tag-teamed to shut down two prejudiced users on Instagram, who tried to encourage Ashley to leave her rumored girlfriend. Cara had fierce words to say about their ‘true love.’

It’s 2019, and yet there are still anti-gay trolls lurking on Instagram — two of which Ashley Benson, 29, and Cara Delevingne, 26, couldn’t ignore on April 29. One of the haters, who runs a fan account for Ashley, alleged that Cara was “tying up and slapping” a friend in a video shared to the fan page. “EVERY week there is something disrespectful towards @ashleybenson…Ashley deserves better!” the fan wrote under the video, which encouraged another troll to pile on the hate.

“I’m serious you need to stay away from that devil and never go back I’m sure many strong handsome religious man would take you back in a heartbeat. You are not like this you aren’t gay you love men and need one,” a second fan wrote in a message to Ashley, which didn’t go unnoticed. “You need to mind your own business. Stop making things up,” the Pretty Little Liars star replied, but Cara swooped in with even more to say.

“You are f***ing disgusting! If you have a problem with true love then come and say this s**t to my face instead pathetically hating through Instagram,” Cara replied, tagging both the trolls. The Suicide Squad star continued, “I genuinely feel sorry for you both, you are clearly not happy with your lives and have far too much time on your hands. Maybe get a hobby that doesn’t involve being homophobic and hating others for being happy.”

Cara’s defense about her and Ashley’s “true love” is the closest the actresses have come to confirming their romance, which was first rumored to be a thing after they were seen leaving Lauryn Hill’s concert in New York in May 2018. Ever since that outing, Cara and Ashley’s PDA photos have done the talking — from a butt grab in the Maldives to, most recently, a “cuddle puddle” on March 5, these two appear to still be going strong. They even co-starred in a new movie together, “Her Smell,” which premiered on April 12. The film released an accompanying music video in which Cara and Ashley also appear in (The Akergirls – “Can’t Wait”).