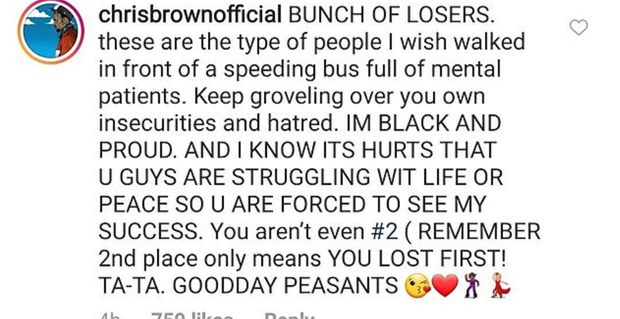 Chris Brown took to Instagram on Apr. 27 to majorly diss the band Chvrces in a response to a message they posted about his recent collaboration with Marshmello that labeled him an ‘abuser’

Chris Brown, 29, fueled up some drama on Apr. 27 when he proved he’s not putting up with anyone bad mouthing him by posting a shocking message to Instagram. The singer posted an intense response to an Apr. 25 message the band Chvrces posted on their own Instagram account about how they are no longer supporting Marshmello, 26, because he collaborated with Chris and Tyga, 29, on the new song “Light It Up”. In the message, they called Tyga a “predator” and Chris an “abuser”.

It didn’t take long for Chris, who pleaded guilty to felony assault in 2009 for physically hitting his ex-girlfriend Rihanna, 31, to comment on the controversial post and he definitely didn’t hold back. “BUNCH OF LOSERS,” his response started. “these are the type of people I wish walked in front of a speeding bus full of mental patients. Keep groveling over your own insecurities and hatred. IM BLACK AND PROUD. AND I KNOW IT HURTS THAT U GUYS ARE STRUGGLING WIT LIFE OR PEACE SO U ARE FORCED TO SEE MY SUCCESS, You aren’t even #2, ( REMEMBER 2nd place only means YOU LOST FIRST! TA-TA. GOODDAY PEASANTS.”

Chris’ dissing comment to the band comes after Tyga, who has been sued by multiple women for filming them topless and allegedly showing the footage off to the public after promising he wouldn’t, left his own response to the same message, but his was quite the contrast. “Where all God’s children. Everyone makes mistakes no ones perfect. Let’s Keep the energy positive,” it read. Tyga has also been criticized for dating a young Kylie Jenner, 21, after there was some speculation that their relationship began when she was only 16 and he was 24.

Like Chris and Tyga, Chvrces, whose lead singer is Lauren Mayberry, 31, also collaborated with Marshmello on their song “Here With Me”, which was released in Mar., and although they said they “like and respect” him “as a person”, in their message, they feel his willingness to work “with people who are predators and abusers enables, excuses and ultimately tacitly endorses that behaviour.”

After the band posted their feelings about Marshmello, Lauren has been taking to social media to share screenshots of numerous death threats and threats of violence and rape she’s been receiving from Chris’ fans.