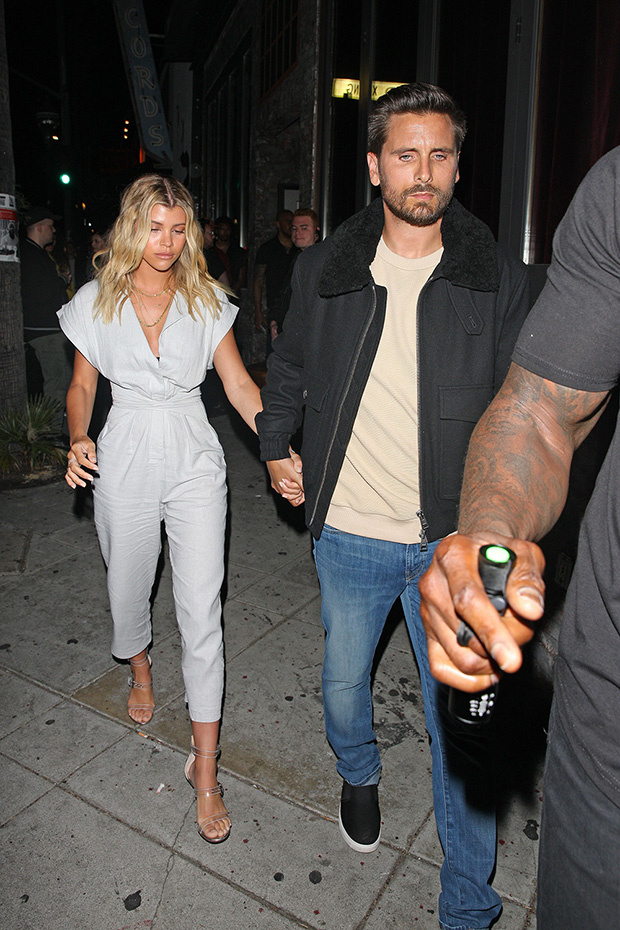 After a low-key vacation in Mexico, Scott Disick and Sofia Richie are back in L.A. and they enjoyed a date night out together!

Sofia Richie, 20, and Scott Disick, 35, had a busy night on April 25! The couple hit up a slew of events in Los Angeles, and held hands in between their travels. They went to an Asos and Diane von Furstenberg event, as well as a club, in the same night. Sofia rocked a grey jumpsuit with a deep v-neck and wore her blonde hair in beachy California waves. She paired her look with strappy heels and layered necklaces.

Her boyfriend wore a cream sweatshirt, blue jeans, black jacket, and black sneakers. The couple posed for photos at an Asos Life Is Beautiful event, and they wrapped their arms around one another while taking the pic. Sofia and Scott stopped by the luxurious Chateau Marmont for a new launch for Diane von Furstenburg, titled TVF, designed by Talita Furstenberg, 19, Diane’s granddaughter. The couple also attended the No Name Club, despite Sofia being unable to drink.

Just two days prior to their L.A. outing, the couple relaxed on vacation in Mexico. Sofia showed off some gorgeous bathing suit looks while at the beach with Scott, including a black thong bikini, as well as a fun, bright pink one. The famous duo also seemed to enjoy their time on a yacht while in Mexico – we’re so jealous!

Sofia and Scott began dating in 2017, and while people initially brushed off the pair as casual, they’ve proven that they’re a rock-solid couple. Sofia has spent time with Scott’s kids, Mason, 9, Penelope, 6, and Reign, 4, and she has joined him for Kardashian family vacations and parties. Sofia has shown that even with the harsh scrutiny of being part of the Kardashian empire, she can hold her own.

We’re glad to see the couple out and about, and we loved their fashionable looks on their date night!