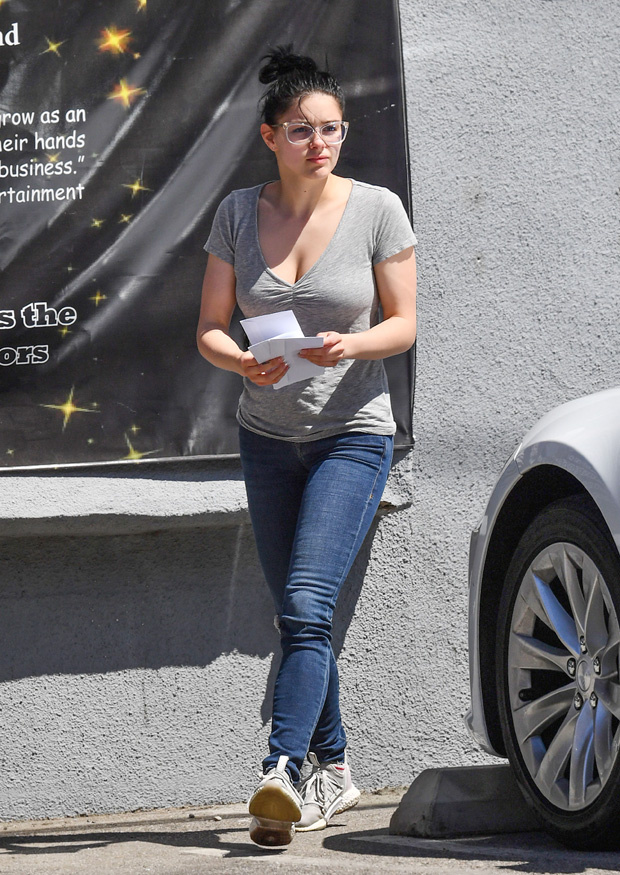 Ariel Winter’s complexion was as clear as the plastic shades she wore to go on an errand run in Los Angeles. In just a T-shirt and jeans, the ‘Modern Family’ star was out and about to prepare for the next big music festival after Coachella.

We need the number of Ariel Winter’s esthetician or the steps to her skincare routine — whatever she does to look so radiant without a drop of foundation. The 21-year-old actress showed her makeup-free face while running errands in Los Angeles on April 25, which was smooth and glowing. She kept her outfit casual in a grey T-shirt, ripped jeans, athletic sneakers and transparent plastic glasses.

Ariel’s all-natural look really was natural, as the Modern Family star has denied undergoing any plastic surgery procedures besides her breast reduction surgery in 2015. The actress shut down a troll who tried to say otherwise. “She was so beautiful before she started chopping up her body and if me saying so helps one [girl] out there to feel beautiful who’s thinking of [plastic surgery] then it’s worth it,” an Instagram user commented underneath a round of photos at the 21st birthday party for her best friend, actor Joe Kaprielian. Ariel replied, “I appreciate you wanting to help girls love themselves the way the [sic] are, but you are also kind of cutting someone (me) down which isn’t what I think you were trying to do? I also didn’t get plastic surgery. That is also not being supportive of women if you’re just assuming something about the way they look.”

Rather than plastic surgery, it was actually a change in medication in 2018 that prompted the weight loss. “For years I had been on anti-depressants that caused me to gain weight that I couldn’t lose no matter what I did,” the ABC star revealed during an Instagram Q&A session on April 11. She added, “The change in medication instantly made me drop all of the weight I couldn’t lose before by just giving me back a metabolism. That was very unexpected.”

Ariel and her boyfriend Levi Meaden, 31, were preparing for the road trip to Stagecoach in Indio, CA, which kicks off in according to the paparazzi who snapped the photo above on Thursday. The country music festival kicks off on April 26, and we know how excited Ariel is for the three-day event! “Me reminding myself that in just about 3 weeks I’ll be at @stagecoach 🤠😍 I loveeee country music! I’m ready to bust out my boots people,” Ariel told Instagram fans on April 4. She even got in the country spirit early by rocking daisy duke cutoffs on April 23.