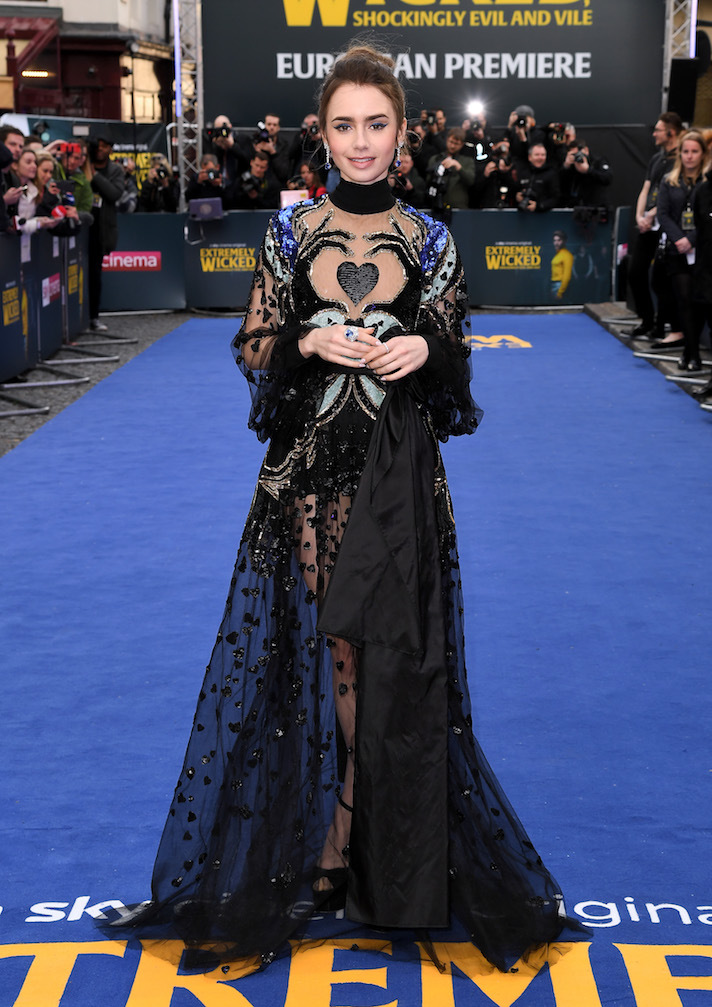 When celebrities dress for a theme, I swear my serotonin levels rise. Typically, celebs have the means to truly go all-out, and that’s exactly what happened at the European premiere of Wicked, Shockingly Evil and Vile on Wednesday. At the Netflix film premiere, Lily Collins went with a literal interpretation of the film’s title, and dressed like the most stylish evil queen I’ve ever seen. Maybe she’s up for a role as the new Disney villain, or maybe she just really wanted to make a bold choice. Either way, I’m very into it.

Although Wicked, Shockingly Evil and Vile is a Netflix film (coming out May 3!) about a real-life villain, Ted Bundy, Collins went for a more theatrical look. She wore an Elie Saab gown that, TBH, looks like it should be in a museum. The black, blue and sequined-all-over gown is straight off of Elie Saab’s Fall/Winter 2019 Paris Fashion Week runway. It features immaculate sparkly details, hands surrounding a heart (I get total Snow White evil queen vibes) and flowing black tulle. And, though you can’t really see them behind all the tulle, Collins also donned Giuseppe Zanotti heels, giving her some major height. Is Lily Collins secretly a very fancy cosplayer? Because she totally could be in this ensemble.

But you haven’t lived until you’ve seen the gorgeous back of Collin’s dress as well. The actress has legs for days behind all the sheer tulle. Plus, you can see some of the incredible sequined details a little more clearly. This gown is truly a work of art.

Collins was also joined by her co-star in the film, Zac Efron. (He plays Ted Bundy himself, y’all.) I love Zac Efron with all my heart, but Collins’ look has him beat this time around. (Sorry, Zac!) Also, I’m not really sure what’s going on with Efron’s hair, so I’m just chalking this up as a major win for Lily Collins.