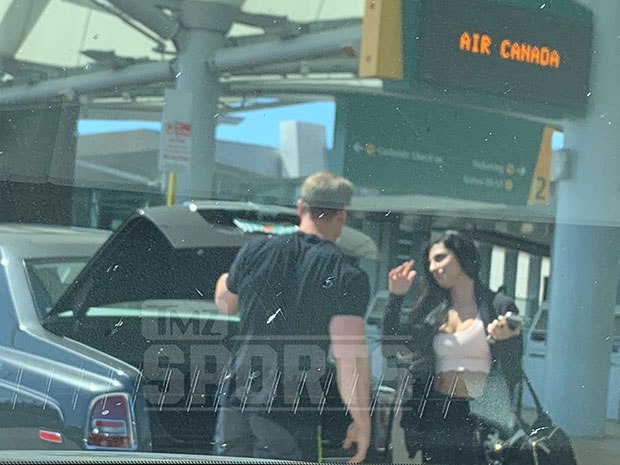 John Cena has gone public with his new relationship, and it looks like it’s moving fast! He and new girlfriend Shay Shariatzadeh kissed each other goodbye on April 23.

John Cena, 42, and girlfriend Shay Shariatzadeh, 30, are escalating their romance! John was seen dropping off Shay at the San Diego airport on April 23 amid his ex-fiancée Nikki Bella, 35, posting hot pictures in a bikini on Instagram! John generously brought his new girlfriend to the curb in photos taken by TMZSports.com and gave her a hug and a kiss as he said goodbye. He opened the trunk of the car to get out her bag, as well. John and Shay were last seen going on a date on March 27, in which they had a four-hour dinner together.

The same day John and Shay kissed goodbye at the airport, Nikki shared a pic on Instagram with twin sister Brie, 35, enjoying a sunny day at the beach together. Nikki showed off her toned abs in a pink bikini, while Brie rocked a black string bikini in the water. Nikki rocked black, brown, and white turtle sunglasses while her sister matched her shades to her bathing suit. Nikki captioned the ‘gram, “Besos Gemela,” which is Spanish for “twin kisses.”

John’s new relationship comes after he and Nikki broke off their engagement in July 2018 after being together for six years. Nikki has since publicly moved on as well, with her former Dancing with the Stars partner Artem Chigvintsev, 36. Nikki has denied that they’re in an official relationship on The Bellas Podcast, but she described what she enjoys most about spending time with Artem.

“He’s an amazing cook, he’s an amazing lover,” Nikki gushed on the podcast. “He does work around the house.” Nikki also spoke to Artem’s body – she even described how his sweatpants were small on her (which is totally fine)! “I had to borrow sweatpants one time, I almost lit them on fire I was so embarrassed,” Nikki said. “They were baggy on him and on me it looked like skinny jeans. I was like, ‘What the F?’ This is not cool. And can you imagine when I’m on top? That I’m gonna save that for a whole other episode. Thighs galore, girl.”

Brie inquired whether or not Artem and Nikki were officially an item on the podcast. “No…Because I’m not ready,” Nikki said. Well, what’s important now is that she enjoys whatever kind of relationship it actually is, and we’re happy both Nikki and John have found people they enjoy spending time with!