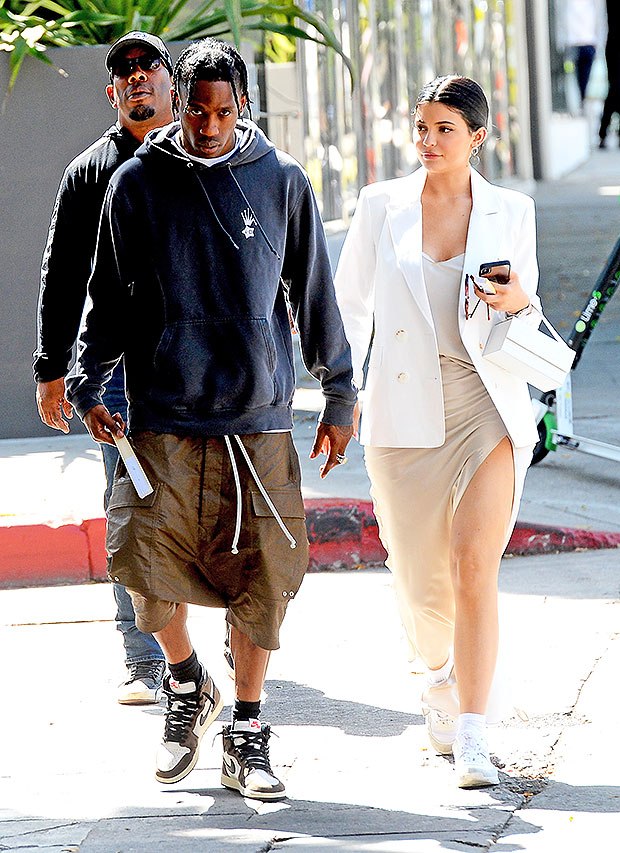 Kylie Jenner played peekaboo on April 22 in a dress that featured a high-slit on just one side, giving a leggy display as she strut the streets with her rapper boyfriend.

For some, furniture shopping would be a casual affair, but Kylie Jenner, 21, was the picture of glamour as she stepped out to do so on April 22. The Keeping Up With The Kardashians star and her rapper beau, Travis Scott, hit the streets in West Hollywood in search of new pieces for their home, but it was Kylie’s outfit that was the main event. Her curve-clinging dress was one fierce look, especially seeing as it featured a high slit that showed off some leg. With a crisp white blazer thrown on top, Kylie looked like the business woman she is while still maintaining some serious sex appeal thanks to her revealing gown.

While Kylie’s outfit already had us smitten, her affection for her Astroworld boyfriend was completely heart-melting. The two walked down the sidewalk hand-in-hand, looking every bit the power couple they are. The mother of Stormi further turned up the heat with her accessory choices. Kylie rocked a trendy, box-shaped clutch on her arm, and a glamorous pair of dangling earrings. She and her hubby both showed off their riches with a display of flashy rings, and Ky added a massive gold watch to her ensemble as well.

It was just one day before the shopping trip that Kylie and Travis were spotted holding hand’s at the Coachella Music & Arts festival. The loving pair showed up in support of Kanye West’s Sunday Service performance, and Kylie stunned as she flaunted some sweet PDA with her beau. In a gorgeous beige dress, the youngest KarJenner sister looked elated to witness history in the making, as Ye and friends jammed out on a mountain top. In videos from the day, she flashed a big smile as she walked with Travis, as well as her sisters, en route to the show.

This might be the least casual furniture shopping outfit ever, but we love that Kylie keeps the glamour notch turned up high everywhere she goes. You go, girl.