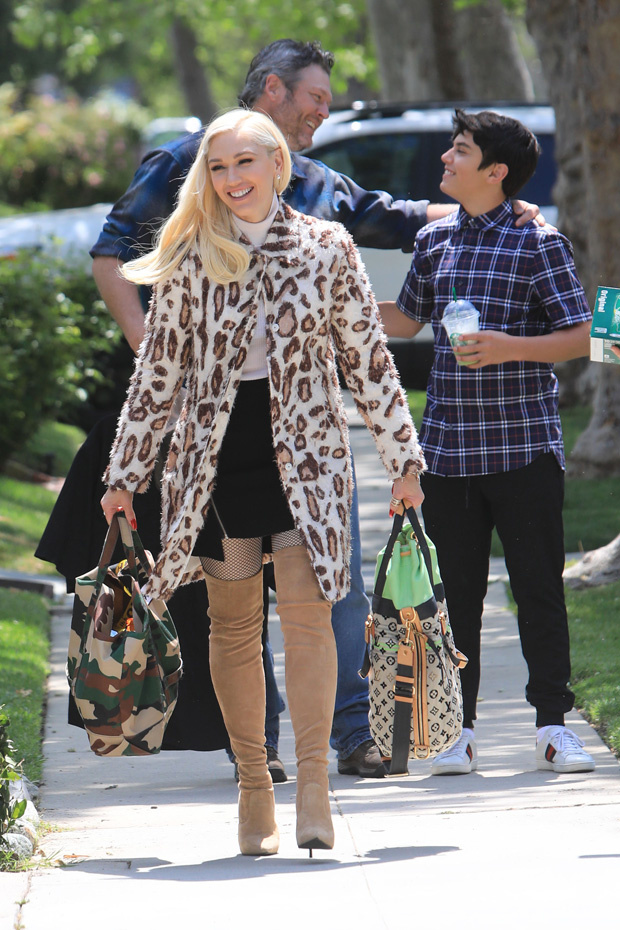 To Gwen Stefani’s three sons, Blake Shelton is not just a guy their mom is dating — he’s ‘taking on the role of a step dad.’ But the country singer has no intentions of coming ‘in between’ Gavin Rossdale and his children.

Blake Shelton, 42, doesn’t have any kids of his own, but he takes his role of honorary step dad seriously when it comes to Gwen Stefani’s three sons Kingston, 12, Zuma, 10, and Apollo, 5. “Blake and Gwen spent Easter together as a family because Gwen and the kids think of Blake as a father figure,” a source close to Gwen and Blake EXCLUSIVELY tells HollywoodLife. Gwen and her brood appeared in good spirits as they were photographed heading to Easter service on April 21, and their happy faces mirror how everyone feels about Blake! “They respect and love him and are very appreciative of him being there for them,” our source continues. And that’s because the country superstar holds himself responsible as a role model for Gwen’s sons.

“Blake is taking on the role of a step dad close to his heart and is really loving it,” our source tells us. But that doesn’t mean he’s trying to diminish Gavin Rossdale’s role as a father to Kingston, Zuma and Apollo, after the Bush lead singer split with Gwen in 2015. “This in no way takes the kids away from Gavin and how he is as a father because Gavin is a wonderful father, but Gwen and the kids are happy that everyone gets the best of both worlds,” our source explains. “Blake stepped up and will be in their lives forever just as Gavin will be. It’s a pretty healthy situation. Everyone is getting along which is pretty nice to see.”

While Blake respects Gavin as the boys’ father, the “Ol’ Red” singer believed bonding more with Gwen’s kids would be to their benefit. “Blake believes it makes for a healthier situation for him to help out and be there as a present man in their lives when Gwen has her time with them,” a second source EXCLUSIVELY tells HollywoodLife. “He doesn’t see any harm in bonding with the boys and has made it clear to Gavin that he is only there to help support them.”

Blake and Gwen, who once co-starred as judges on The Voice, confirmed their romance in Nov. 2015. Nearly four years later and a proposal is yet to happen, but we hear that the couple is holding off for a sweet reason. “Blake and Gwen want Apollo to get a little older before they end up getting married,” our first source says of the five-year-old child. “They want everyone to be present for that special occasion when it eventually happens down the line.”