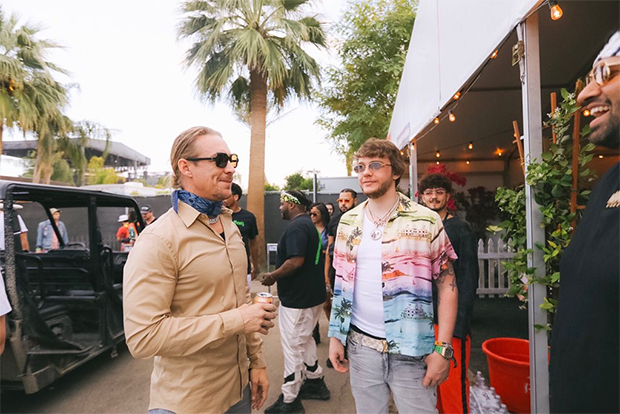 HollywoodLife caught up with the famed producer after his 2019 Coachella set & got the tea on all his upcoming projects. Unsurprisingly — he’s been in the studio with some incredible artists!

Murda Beatz has made his mark on so many tracks that it’s nearly impossible to turn on the radio and not hear his famous “Murda on the beat” catchphrase. Between his impressive start in Atlanta with Migos, and eventually putting in work with Drake, (“Nice For What“) the hit-maker has solidified his spot as one of the top producers in the game. So, it was only fitting when he was announced as a performer at the 2019 Coachella Music & Arts festival. With a hit-filled setlist, the producer rocked the stage and even brought a few surprises, including guest appearances from Rich the Kid and A$AP Ferg. Following the star-studded set, we caught up with him backstage for an EXCLUSIVE interview on all the epic projects he’s been working on.

Congrats on performing at Coachella this year. How was the crowd?

Amazing — so good. DJ’ing at festivals and just getting thrown on lists, sometimes, you have a hard crowd, you know, this was amazing. I love this festival, it’s awesome.

You’ve had such an impressive career so far. Is there a song that you’re most proud of?

“Pipe it up.” Just because “Pipe it up” that was my first big record with Migos and that song created dance with the dab off of that record and that shit just blew up. That whole dance move went internationally from Barack Obama to soccer stars, it touched everyone…NFL players, the kids, everyone.

What’s your craziest career memory since blowing up?

Definitely just being with the Migos before they popped off, that was definitely a big one. Me going to Chicago at the age of sixteen to try to meet rappers and get out there. Creating “Nice For What.”

What do you think drove you to hit the pavement and work so hard at such a young age?

Just my attitude and my outlook on everything and just going with the flow, wanting to network and being very…not being worried about anything. Just being like, ‘I like rap, that’s what I do.’ No shame, just ask a lot of questions, just travel to a lot of places, get out there, network and put a face to my music.

What projects are you working on that fans can look forward to?

Migos, Drake, my own, I’m just really focused on my own stuff. Working on a lot of stuff.

Is there someone you haven’t worked with yet that you’re dying to link up with?

And it’s been long-rumored that you’re working with Selena Gomez here and there. How did you guys link up in the first place?

My manager got connected with her people and stuff and she got on a record.

Awesome. Do you think that would be something you’d delve more into – the pop side of things?

Is there anything else you want to tell fans?