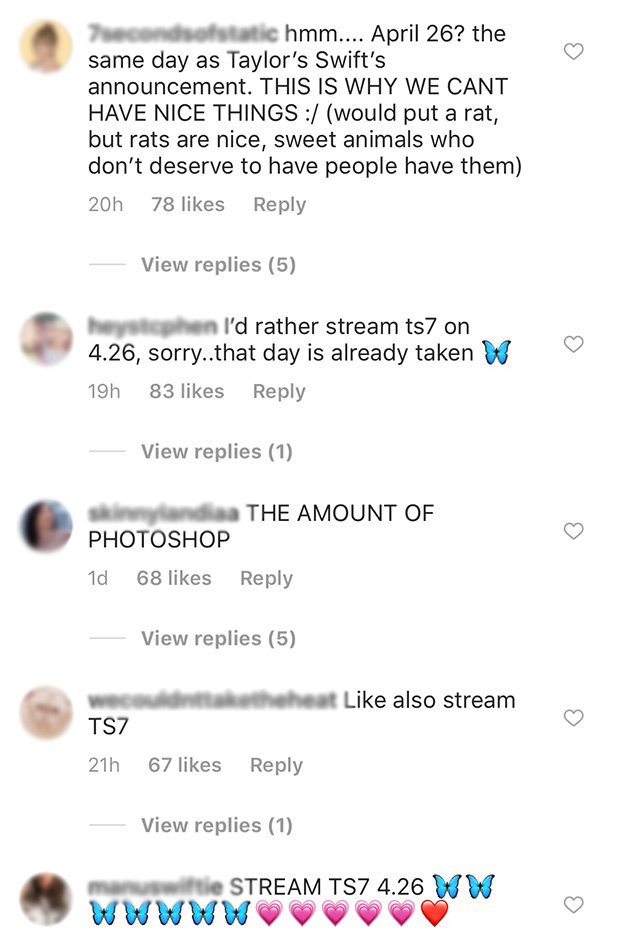 Kim Kardashian and Taylor Swift are now sharing the same countdown for their respective projects, and fans think it’s more than a coincidence.

Taylor Swift’s fans are not pleased with the date that Kim Kardashian, 38, chose for the launch of her KKW FRAGRANCE X KYLIE fragrance. The release date is April 26, which just so happens to be the day that Taylor, 29, has been hyping up in her last five Instagram posts since April 13. Fans believe that Taylor is releasing new music from her seventh studio album — dubbed “TS7” — on the appointed day, and they think Kim’s trying to steal the spotlight from her rival. “NONONO THIS IS TAYLORS DAY STOP TRYING TO MAKE IT ALL ABOUT YOU,” one fan commented, while another Swiftie added, “… April 26? the same day as Taylor’s Swift’s announcement. THIS IS WHY WE CANT HAVE NICE THINGS :/.”

One fan even dissed Kim by poking fun at her husband, Kanye West: “Yo, Kim I really don’t care about your fragrance, I’ma let you finish, but first go buy & stream Taylor’s new single at 4.26!” Of course, the comment was a twist on what Kanye actually said when he took the mic from Taylor at the 2009 MTV Video Music Awards (you know, the whole source of this feud).

Another fan dug into the history of Taylor and Kim’s feud with one telling emoji. “Yeah nope, sorry. April 26th is Taylor’s day. 🐍,” the Swiftie wrote, borrowing the same snake emoji that once flooded Taylor’s Instagram posts in 2016. The wave of trolling came after Taylor’s rep declined that Kanye called for the pop star’s approval of his track, “Famous,” which mentions Taylor’s name. “Kanye did not call for approval, but to ask Taylor to release his single ‘Famous’ on her Twitter account. She declined and cautioned him about releasing a song with such a strong misogynistic message. Taylor was never made aware of the actual lyric, ‘I made that b**ch famous,’” Taylor’s rep wrote in a statement, and afterwards, Kim leaked a video of a phone call between Kanye and Taylor, who said one of the lyrics was “like a compliment kind of.” The pop star claimed afterwards that she wasn’t informed of the “that b**ch” line. That specific line also can’t be heard throughout the phone call.

Fans believe the shade is now continuing into 2019, although Taylor was the first to bring up memories of her and Kim’s bad blood. “In my experience, I’ve come to see that bullies want to be feared and taken seriously. A few years ago, someone started an online hate campaign by calling me a snake on the Internet,” Taylor wrote in an essay for Elle, published on March 6. She continued, “The fact that so many people jumped on board with it led me to feeling lower than I’ve ever felt in my life.”