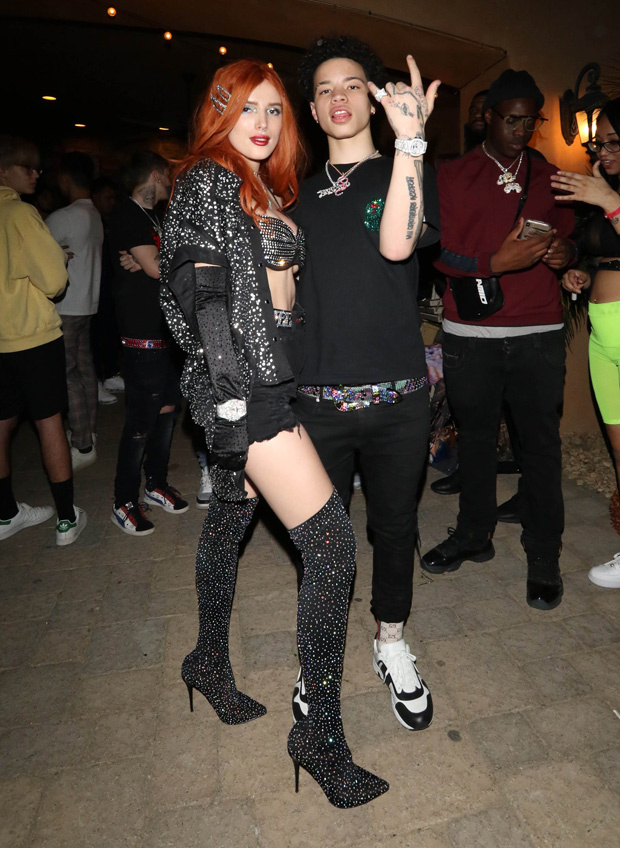 Bella Thorne dazzled with her sequined black outfit at the Flaunt party on the second night of Coachella’s first weekend!

While there have been so many stunning looks during the first weekend of Coachella, this might be one of our favorites. While attending the Flaunt party in Indio on Apr. 13, Bella Thorne, 21, donned a sparkly studded bra along with matching sequined thigh-high boots. She completed her glittering look with black jacket, long black gloves and black shorts.

We reported earlier that after Bella’s split with her ex-girlfriend Tana Mongeau, 20, whom she dated at the same time as her current boyfriend Mod Sun, 32, Thorne has grown even closer to Mod. “Bella’s still very much in love with Mod Sun, her boyfriend, they are together almost non stop,” a source close to Bella told HollywoodLife EXCLUSIVELY. “She still went through all the breakup feelings when she and Tana split but it was all made a lot easier because of her relationship with Mod Sun. She loves him and they are very solid, if anything, this breakup with Tana has made them closer.”

However, after her latest split from Tana in Feb., Bella is taking the time to also get to know herself. “She doesn’t even know herself,” another source told us. “She might want to date another guy instead when it comes to her next relationship. She is all about a good time and nothing very serious. That’s not to say she wouldn’t deem her next relationship as important but she is not seeking wedding bells anytime soon.”

“Bella is a free spirit and wants to share her time with people who are just like her,” our source went on to say.