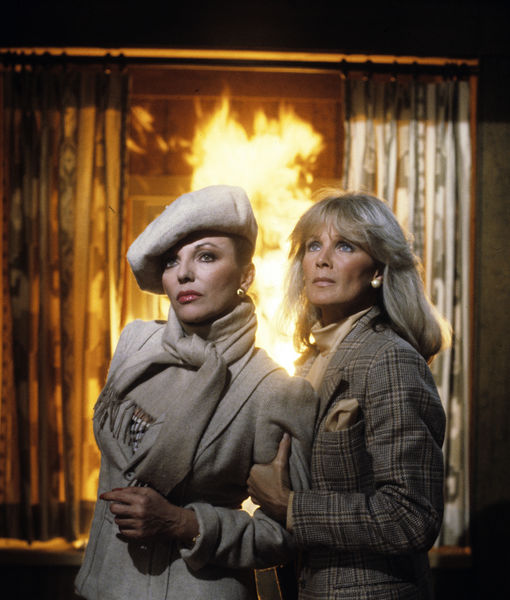 Dame Joan Collins is “unhurt” but “obviously shake up and distressed” after discovering a fire in the Central London apartment she shares with husband of 17 years Percy Gibson Saturday, People Magazine reports.

The 85-year-old actress, most famous as Alexis on the ’80s nighttime soap “Dynasty,” smelled smoke, which led her husband, 54, to check things out. What he found was that their guest suite was ablaze.

Luckily, he was able to contain the fire while the firefighters summoned by Collins made their way to the scene.

The couple’s rep told People, “They escaped the fire unhurt, but obviously shaken up and distressed from the whole thing. Percy really saved the day. He was the one who put the fire out and took control until the fire brigade arrived.”

Collins is returning to her apartment Sunday to inspect the damage after profusely thanking her fans for their support.

A fire was part of a suspensful episode of “Dynasty” in 1983. Collins is seen here with co-star Linda Evans.

“THANK U from the bottom of my to the marvelous @LondonFire who attended to the terrifying fire yesterday in our flat. #threealarmfire,” she wrote on Twitter. “My hero Percy had already doused the flames consuming the entire wall with handheld extinguisher… And thanks also to the @NHSEnglandLDN #nhs #emt #Ambulance crew who took care of our smoke inhalation and comforted me. And the wonderful @metpoliceuk who kept the street closed and everyone safe. #gratitude.”

A police source told the BBC that the fire had was “non-suspicious.”

Collins, one of the last of the ’50s studio stars, has stayed busy in recent years writing books and newspaper columns, appearing in the films “Absolutely Fabulous: The Movie” (2016) and “The Time of Their Lives” (2017), and starring in the series “The Royals (2015-2018) and “American Horror Story: Apocalypse” (2018). Her sister, novelist Jackie Collins, passed away in 2015.