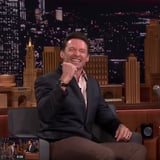 Hugh Jackman was thrilled when he received official acknowledgment of his Guinness World Record earlier this year, but the Aussie star is far from giving up on his attempts to get in that illustrious book, perhaps because he has to share his current record with his X-Men costar Sir Patrick Stewart. During an appearance on The Tonight Show Starring Jimmy Fallon, Hugh spilled the beans on his childhood attempts to break all manner of records (to be honest, it sounds like his brother was way more into it than him) and then tackled a few new ones with Jimmy. From catching coins to attempting the longest ever episode of The Tonight Show, these guys are not giving up easily. Watch for yourself to see how successful they are.