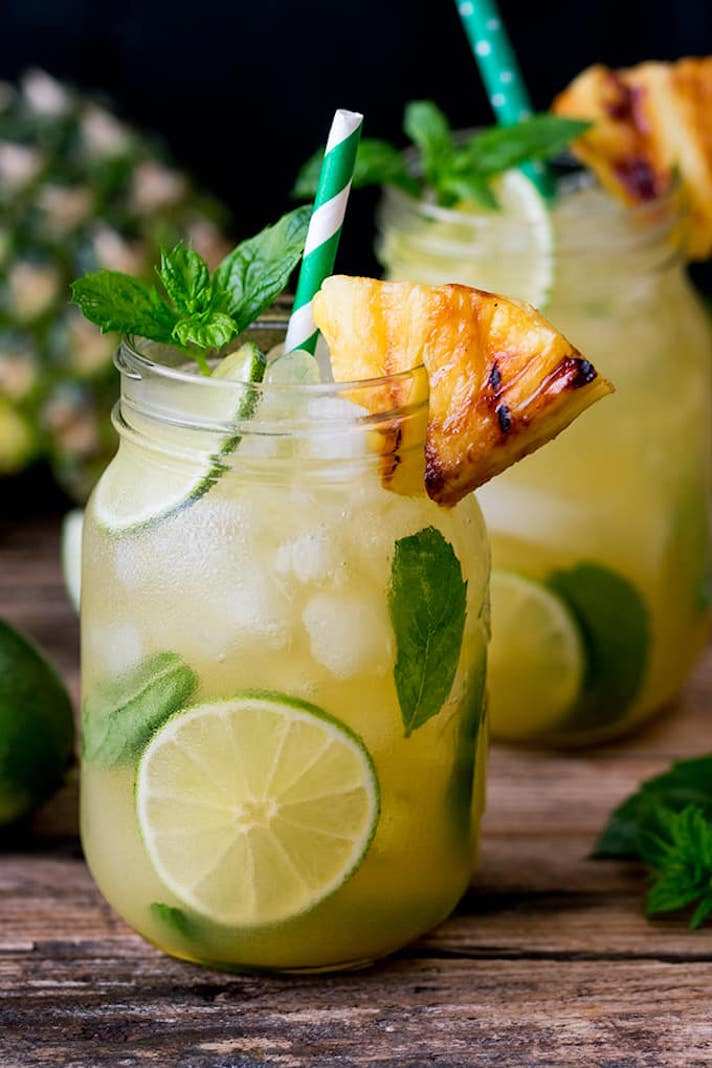 Thanks to increasing popularity of the Moscow mule (ginger beer, vodka and lime), easy ginger cocktails are pretty mainstream these days. Thing is, I love ginger, but I don’t love Moscow mules. Vodka is fine, but I prefer liquors that are more complex—a barrel-aged rum, a floral gin or a really good whiskey. And since ginger is so strong and distinct, it can stand up to the deeper flavors in these types of alcohol, no problem.

If you’re looking for something gingery but a little more interesting than a Moscow mule, there are plenty of easy ginger cocktails out there that fit the bill. Many call for ginger beer or ginger ale, which you can find at any supermarket. Others call for fresh or candied ginger, which is also sold pretty much everywhere. And, if you want to add ginger juice to a cocktail, just run peeled ginger through a juicer, or muddle it by hand. No matter where your ginger flavor is coming from, it’ll come through in the final drink (I promise).

Below are 18 easy ginger cocktail recipes for every taste, from beachy rum drinks to a nightcap-appropriate Amaretto sour. Try one out, and you’ll never go back to a plain old Moscow mule again.

There’s no alcohol required in this sweet, spicy ginger honey switchel, but you can add vodka or gin if you’re so inclined.

If you need something with a little extra strength, try a Zing Ting on the rocks.

What to do:
Shake and strain over ice into rocks glass. Garnish with lemon zest wrapped around a maraschino cherry (optional).

Christmas or not, this tart ginger cocktail is a great nightcap.

A gin fizz is classic. This grapefruit-ginger version is less so, but that’s not a bad thing.

True to it’s name, the Kentucky mule is like a Moscow mule, with bourbon instead of vodka.

This gingery drink is named after a legend, and it just might become one in its own right.

Put that melon baller to good use (or, any use…) and whip up this fruity ginger cocktail.

This turmeric-ginger cocktail might not be magic, but it comes close.

There’s no actual beer in these beergaritas, just a combination of tequila and ginger beer.

If the weather’s nice, you might want to trade in your Moscow mule for something similar, but a little more tropical. This version is made with aged dark rum and fresh lime juice, so it’ll bring your mind right to the beach. (Not literally. Sorry!)

In a tall glass with ice, stir together rum and lime juice. Top with ginger beer.

These lemony ginger cocktails get some herbal earthiness from fresh rosemary.

If you’re looking for something lower-proof, a Prosecco cocktail is a great idea.

Day or night, this whiskey ginger smash packs a punch.

No better way to get your apple-a-day than with this ginger smash.

Please a crowd with this big-batch pear and ginger cocktail.

Strawberry season is the best. Take advantage with this strawberry-ginger drink.

If you really want to impress a friend with a class after-dinner drink, go with a kicked-up Amaretto sour.