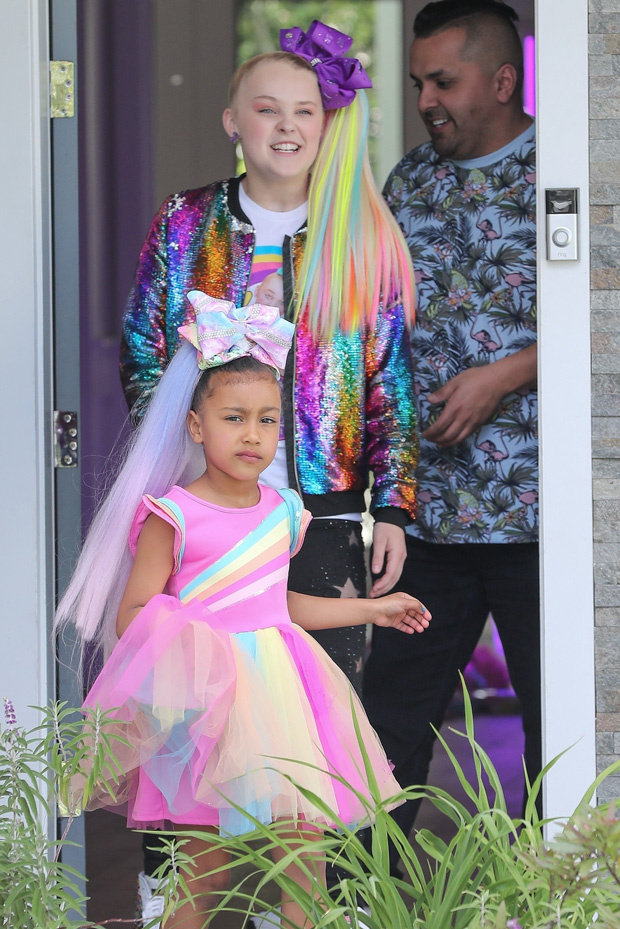 North West and YouTube sensation JoJo Siwa are teaming up for an exciting video, and new photos show that Kim Kardashian and Kanye West’s daughter transformed into a mini JoJo for the shoot.

North West’s dreams are coming true! Kim Kardashian and Kanye West’s five-year-old daughter is a big fan of YouTube idol and former Dance Mom star JoJo Siwa, 15, joining nine million other subscribers who keep up with the rainbow-loving teen sensation, and now, North was seen filming a video with her idol. The duo was spotted in front of JoJo’s house in Los Angeles on March 27, along with a cameraman, and North transformed into her teen idol in fairy princess attire: a pink dress with rainbow print and tulle, a gigantic bow and a purple ombré ponytail extension.

JoJo stuck to her go-to look, which was sparkles and every color possible on a sequin blazer, rainbow-streaked ponytail and a T-shirt with her own face on it. JoJo and North were also seen sitting on top of JoJo’s glittery BMW (yes, the same one Justin Bieber put on blast). Kim was on set, although she didn’t go with the cotton candy theme in a black windbreaker and bicycle shorts. The KKW Beauty owner can be thanked for making this collab happen, as she was the one who alerted JoJo that North is a mega fan. “LOL @ North’s bow 🎀🎀🎀🎀🎀 She is obsessed with @itsjojosiwa,” Kim tweeted on Feb. 4, referring to a big hair bow her daughter wore, which was inspired by JoJo.

From there, the blonde singer and dancer told Kim to “DM” her so she can send “special” bows, and they kept in contact over a month later. “North just FaceTimed @itsjojosiwa and her life is made!!!!!! 🎀🎀🎀 That was the cutest thing ever seeing North soooo excited! Especially when she saw her dog bowbow 🎀🎀🎀,” Kim tweeted on March 16.

It’s unclear what exactly the video will be about, but it will presumably go up on JoJo’s famous YouTube channel. The social media star films everything from music videos to fun vlogs like “Making Instagram Famous Foods In 10 Minutes Challenge!!!” This adds to a growing number of exciting projects North is taking on. Kim’s mini me just appeared on her first solo magazine cover, and Kim shared the photos from WWD to Twitter on Feb. 22.