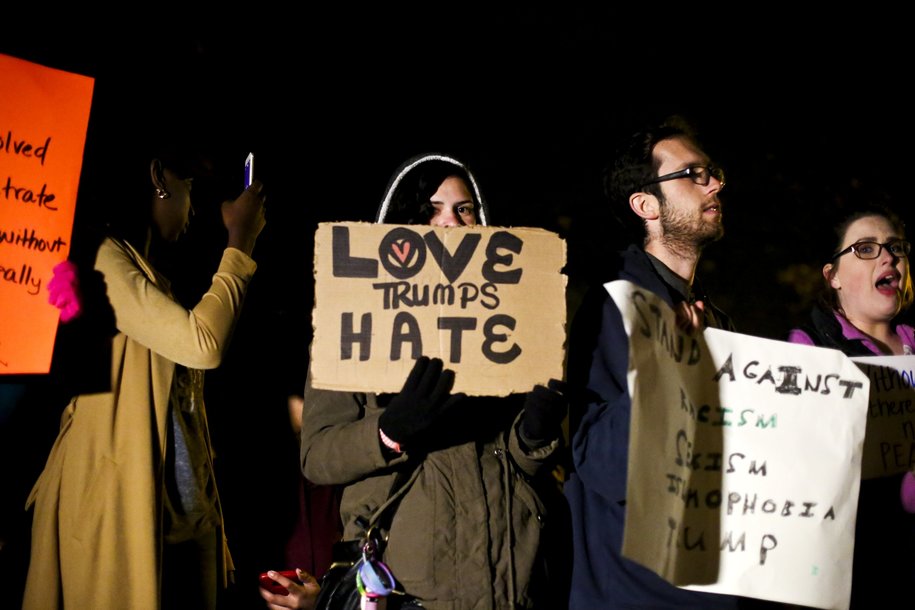 While experts consulted by Daily Kos said that no research has been done to determine whether there is a link between the number of hate groups and the amount of anti-bias incidents or hate crimes in a given area, the ideologies held by some of these groups are “inherently violent,” according to Keegan Hankes, a senior research analyst at the Southern Poverty Law Center’s Intelligence Project, “particularly if we’re talking about white supremacist groups.”

“These are individuals who are grouping themselves together … behind the idea that we need to establish a whites-only state. And there’s no nonviolent path toward that objective,” Hankes told Daily Kos. The most recent SPLC hate groups report identified 15 white supremacist groups in Michigan.

“I think certainly, in the last few years, we’ve noticed that people are being more verbal about it (their bigotry),” said Normandin. “I think once it’s considered okay (to be publicly bigoted), then other groups have formed. It’s very discouraging.”

Whether or not members of hate groups are behind the increase in anti-bias incidents and hate crimes, they are at least busily recruiting. According to the Anti-Defamation League’s new online Hate, Extremism, Anti-Semitism, Terrorism (H.E.A.T.) Map, from 2017-2018 there were 69 incidents in Michigan of hate groups engaging in recruitment activities including posting fliers and stickers in certain neighborhoods, and even putting their cards in a book on genetics in a local library.

The appearance of racist fliers in a neighborhood is just the kind of incident that the Michigan Department of Civil Rights plans to document with its new database. The goal of the database, according to MDCR director Agustin Arbulu, is to learn “where we may need to be responding with educational training opportunities to assist a community or city that may be facing crisis or in trauma.”

One of the SPLC’s identified hate groups, the American Freedom Law Center in Ann Arbor, has filed suit against the MDCR, claiming that the department is targeting the group for its political views. The group, which the SPLC has identified as being anti-Muslim, has also named Attorney General Nessel in the suit.

According to Arbulu, however, his organization cares only about tracking actual bias incidents, not individuals, groups, or their opinions. Further, he said, “We are carefully reviewing the protocols that we need so we don’t infringe on anybody’s constitutional rights.”

The MDCR is also interested in tracking and responding to bias incidents across the board. Arbulu, who was interviewed by Daily Kos on March 12, was asked about a report earlier the same day in the Detroit Free Press concerning Trump supporters claiming that a local Detroit hotel had rescinded a group discount offer after learning the group supports Trump’s proposed wall on the southern border.

“It could be that the hotel is showing bias because these are Trump supporters, and it’s the same as someone showing bias against a Jewish group,” Arbulu said. “They (the We Build the Wall organization) might have a claim to file a complaint with the Michigan Department of Civil Rights.”

The American Freedom Law Center may be unhappy about the attorney general and MDCR’s new initiatives, but advocates who are supporting victims of violence and discrimination say they welcome the help.

“It’s wonderful that Dana Nessel has identified [hate crimes] as a need for her office to investigate,” said Normandin. “I think that’s really, really, a step in the right direction. Speaking of the planned MDCR database, she added, “We think the best thing to do is shed light on these types of hateful rhetoric and hateful incidents.”

According to CAIR’s Walid, though, the “climate of intolerance in our country” is too big an issue to be solved through logging and prosecuting bias incidents and hate crimes.

“When we have the president and people in Congress, as well as state legislators, openly in support of a wall on the southern border based on racism, openly still in support of banning Muslim immigration, then of course this is going to continue feeding the climate that gives rise to hate crimes,” he said.

Victims of hate crimes/discrimination—Where to Go for Help:

Dawn Wolfe is a freelance writer and journalist based in Ann Arbor, Michigan. This post was written and reported through our Daily Kos freelance program.