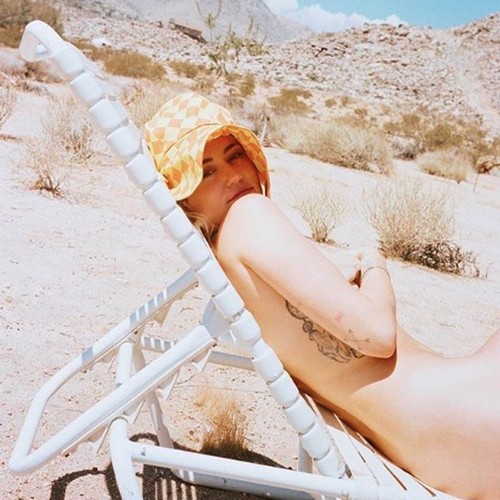 Miley Cyrus shed her clothes for a nude Instagram snap while telling fans she’s “queer and ready to party” as festival season approaches.

The 26-year-old singer posted a shot of herself completely naked apart from a chequered hat as she reclined on a lawn chair in the middle of the desert. Her arm was placed across her chest to maintain her modesty, with Miley captioning the picture: “Festival season is here, I’m queer, and ready to party! lets go summer 2019!”

The sexy snap was shared as it was announced Miley is on the line-up for the upcoming Woodstock 50 Music and Arts Fair – the 50th-anniversary celebration of the iconic music festival which will take place on 16 to 18 August (19).

Alongside another picture of herself wearing a T-shirt and sandals while sitting on a giant cockerel, Miley cheekily wrote: “Woodstock here I come! When I’m not riding a wrecking ball, you can find me on a giant cock.”

Other headliners for the festival include JAY-Z, The Killers and Dead & Company, while Chance the Rapper, The Black Keys, Robert Plant, Halsey and Imagine Dragons are also on the line-up for the Watkins Glen bash in New York.

Miley, who is also performing at Britain’s Glastonbury Festival this summer, came out as pansexual – meaning she’s attracted to people of all genders – and gender fluid in 2015, and said in an interview with Vanity Fair earlier this year that her queer identity is still vitally important now that she’s married to actor Liam Hemsworth.

“The reason that people get married sometimes can be old-fashioned, but I think the reason we got married isn’t old-fashioned – I actually think it’s kind of New Age,” she explained. “We’re redefining, to be f**king frank, what it looks like for someone that’s a queer person like myself to be in a hetero relationship. A big part of my pride and my identity is being a queer person.”