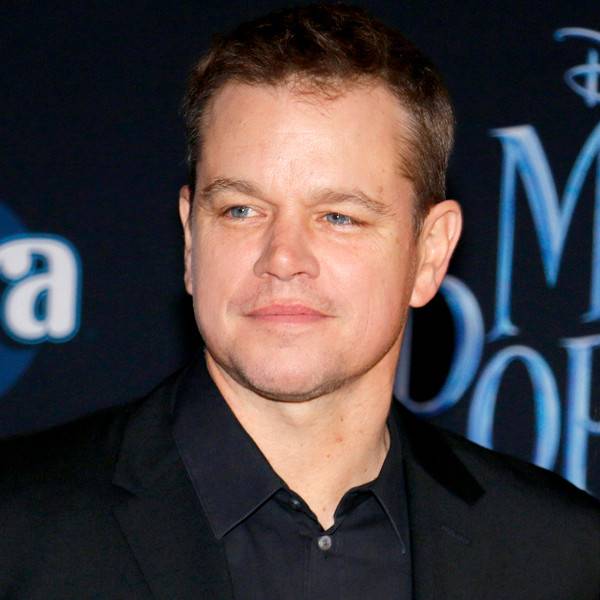 Off-screen, Damon has spent time pairing up with an organization that he reveres and finds “humbling” to work with. He’s one of the biggest names in Water.org and Stella Artois’ “Pour it Forward” campaign, which is helping to end the global water crisis by encouraging people to “Change Up The Usual” right before World Water Day, which is March 22.

We first got a glimpse of this beverage partnership during the 2019 Super Bowl in a commercial featuring Sarah Jessica Parker as Carrie Bradshaw and Jeff Bridges as The Dude from The Big Lebowski. Any fan of these iconic characters knows that it takes a lot for Carrie to not order a Cosmo or The Dude a White Russian, but for Stella and Water.org’s teamwork they’ll surely do it.

“As an actor you can actually become protective over this thing that you created, and the willingness and enthusiasm with which they just jumped in and did this because they believed in the work we were doing was very humbling for us and also really exciting,” Damon explained to E! News.

Damon and his Water.org co-founder Gary White talked to E! News about the campaign and how it’ll maybe even encourage The Martian star to download social media.

Despite being one of the most recognizable celebrities and one of the biggest names of the business, Damon is essentially a ghost on social media. He knows it, too.

“I’m a dinosaur,” he joked, adding that “it’s a conversation” he and his wife Luciana Barroso have a lot. The popularity and importance of hashtags could play a role, like #pouritforward.

“I’m looking at the impact of that and it’s kind of undeniable,” Damon said. “So yes, I think I will probably move into that realm somewhere down the line because it’s so hard for us to message around this.”

Perhaps his good friend Chris Hemsworth could give him that extra push?

“He is definitely in the middle of the social media world and I’ve been able to see up close because I’m with him all the time, the reach that he’s able to have. So definitely in terms of the work at Water.org, it’s definitely making it a hard case for me not to get on social media,” Damon added. “I’ll grow up.”

The Good Will Hunting actor discussed the broad reach of Stella Artois and Water.org’s partnership and why it’s an important topic of conversation.

White added, “A dollar invested today with us helps us move so much further with our mission than a dollar invested ten years ago or five years ago because with water credit, what we’re doing is we’re spurring the market to provide these small loans to people but for having a few extra dollars, they can solve their water crisis.”

Damon shared that working with the Pour it Forward campaign has been “eye opening” for him.

He said, “If you’re raising money for cancer awareness or AIDS awareness, we all have family or friends who have been affected by those things, whereas clean water is not something that we can really relate to. It’s not something that affects any of us or our friends so it’s been an eye opener for me.”

Anyone looking to make an impact on World Water Day or feeling inspired by Damon, Carrie Bradshaw, The Dude and Mindy Kalingcan buy a Stella Artois Chalice on their website, which helps provide 5 years of access to clean water to someone in the developing world.

Damon expressed, “You can go to the bar with your friends and by doing something really simple, you can have this profound impact on somebody’s life in the developing world. That’s just a really cool thing to come up with.”