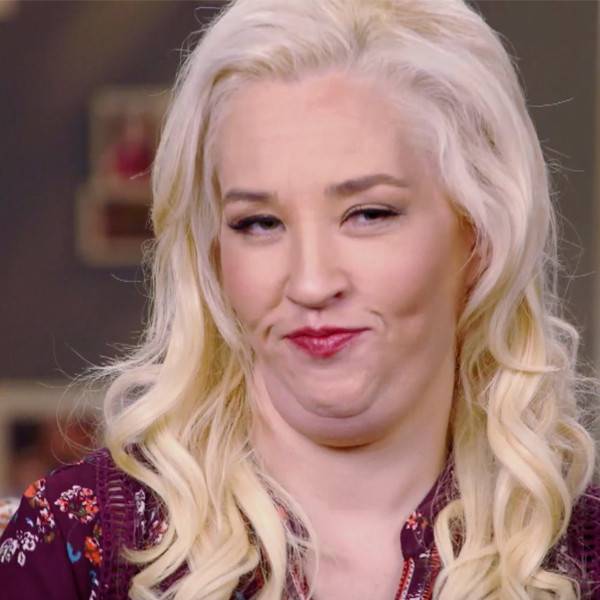 When Mama June Shannon and her family burst onto the scene in 2011, viewers weren’t quite sure what to think.

They were tuning in, to be sure, but Shannon and her family were the sort of reality TV curiosity where one could never be quite sure whether they were meant to be laughing with the participants on-screen or at them. Introduced by way of daughter Alana “Honey Boo Boo” Thompson through a handful of episodes of TLC’s Toddlers & Tiaras, the precocious pageant contestant and her backwoods brood were quickly spun off into a series of their own, startling audiences with a glimpse at the Shannon-Thompson’s family’s downtrodden world in their hometown of McIntyre, Ga. with its population of only 650 as of the 2010 census.

We learned of the simple pleasures of sketti (Shannon’s unique version of spaghetti utilizing melted butter and ketchup as the sauce), watched as the impoverished matriarch relied upon extreme couponing and roadkill to feed the family of six, and allowed phrases like “forklift foot” (Shannon’s big toe had been severely deformed after an accident involving, you know, a forklift and she kept it covered at all costs) and “neck crust” (we’ll spare you the definition on this one) to become a part of the national lexicon (at least, for a time). And when Here Comes Honey Boo Boo came to an abrupt end in 2014 after four seasons, we were horrified to learn the reason why.

Despite the questions over whether TLC was exploiting this family or celebrating them, the footage of Shannon and her brood—including then-boyfriend Mike “Sugar Bear” Thompson (father to Alana) and daughters Anna “Chickadee” Cardwell, Jessica “Chubbs” Shannon, Lauryn “Pumpin” Shannon, and Alana—revealed a family that truly loved one another, who hadn’t buckled under the pressures of their meager circumstances. But sudden fame has a way of bringing everything to light. So after Shannon and Thompson split up in 2014, allegedly because of his infidelity, and rumors began circulating that Shannon had a new man in her life, the revelation that the man in question was a convicted child molester who had only just been released from prison and was registered as a sex offender in Georgia, everyone was understandably shook.

TLC expressed their concern and admitted they were “reassessing the future of the series,” canceling it the very next day. And when Cardwell went to People a day later, it was clear that the right decision had been made.

As she told the publication, the man her mom was seeing, Mark McDaniel, was actually an ex-boyfriend who’d molested Cardwell when she was only eight years old. And despite the fact that Shannon had steadfastly denied she’d once again begun seeing him, her daughter was torn. “I’m just confused,” she said. “I’m hearing one story from Mama and another one from someone else.”

According to Cardwell, her mother expressed skepticism over her daughter’s claims after McDaniel was arrested. “A week or so after it happened, I talked to Mama and she was upset, crying and saying, ‘I don’t believe you, I don’t believe you, why would you do this to me?'” she said. “And I was like, ‘Mama, he did that to me and I can’t do anything about it. You were never there to see it. You were always at work.'”

In a later interview with E! News, Cardwell further alleged that her mother had been using Thompson to “cover her ass” and hide her enduring love for McDaniel while he was behind bars, while also claiming that a trust fund created for her from show earnings had been seriously depleted. “I have a feeling Mama used that money to buy a car or buy him what he wanted,” she told us.

Shannon denied all of her daughters claims. “Not true,” she told E! News. “I have never brought a car for him and all her money is there, beside the money I have given her to live on—$400 every month and pay her $475 each month for cell phone bills for the last two years. That’s the only money I have taken out of there.” And despite the fact that TMZ had a photo of what appeared to be her and McDaniel in bed, she asserted on social media that there was no rekindled relationship. “My kids r #1 priority over anything else and I would never put them in danger period over this or anything else they r my life this is my past I left him 10 yrs ago for it and I wouldn’t go back,” she wrote.

This wasn’t the first time Shannon, a high school dropout who’d later received her GED and who’d given birth to Cardwell days before her 15th birthday, had been romantically linked to a man who would become a convicted sex offender. As she revealed in November amid her war of words with her eldest daughter, the father of her two middle daughters, Jessica and Lauryn, was a man named Michael Anthony Ford. (Ford had once appeared on To Catch a Predator.) However, until that sit-down with Entertainment Tonight, only Jessica had been raised to believe Ford was her father. It turned out that Lauryn had spent her childhood under the impression that McDaniel was her dad.

As Shannon revealed, she had actually seen McDaniel since he’d been released from prison, but it had only happened twice and it was only to give Lauryn closure.

“Since two months to almost six years, she knew nobody but him,” Shannon told the outlet of her 14-year-old daughter. “She was starting to resent Anna and she was starting to ask me questions. I can’t answer those questions for Pumpkin. I was sitting right there with twelve other people [and them]. It was a conversation that she wanted answers to: what happened, why did he leave, if he was her real father. He admitted to her, ‘No.’ [And] I had already told her that but, you know, she wanted to hear from both sides of the story.”

“Jessica and Pumpkin have the same dad, but Jessica’s dad has had nothing to do with her over the years,” she continued. “So, why the hell would I open up that can of worms until today? I lied to my family and told them it was somebody else.”

As she asserted in the interview, the understood why everyone was so upset with her, but now that Lauryn had received closure and was “happy,” that piece of our life is over.”

The damage, however, had been done. TLC wanted nothing more to do with the family, yanking production from their property. And in the face of speculation over whether she’d lose custody of her minor children, Thompson stepped in and temporarily moved back into the house to ensure that the family wouldn’t be separated.

And though it would be a while before she returned to TV full-time, Shannon and her family would continue to make headlines here and there. There was the requisite Vivid Entertainment offer—which seems to come like clockwork whenever certain tabloid curiosities get the rug yanked out from underneath them—hoping to lure she and Thompson into making a pornographic movie in exchange for $1 million. (Shannon refused the payday, saying, “I have more respect for myself and my kids and my family. It ain’t happening, not even for a zillion dollars.”) That was followed by the February 2015 appearance on The Doctors where Alana’s noticeable weight gain was cause for alarm, which, in turn, was followed by the joint Inside Edition interview where she and Lauryn both came out as bisexual. “I played in the minors but never went pro,” Shannon admitted, noting that she’d been intimate with women, but never had a serious relationship with one. And that, of course, was followed up by a turn with Thompson on WEtv’s Marriage Boot Camp: Reality Stars 4 at the end of the year, where the two attempted to work on their “marriage” (they were never legally wed) and Thompson admitted to having same-sex relations of his own.

While Marriage Boot Camp wouldn’t be able to repair the fissures in Shannon and Thompson’s relationship, it would help to foster the next important relationship in the morbidly obese—at her heaviest, she weighed in at 460 lbs.—matriarch’s life: The one with WEtv. As she decided to take control of her health following her stint on the reality series, first having part of her stomach removed as part of a sleeve gastrectomy before turning to dieting and a personal trainer, she landed a series of her very own on the network.

Mama June: From Not to Hot debuted on WEtv on February 24, 2017, with most of the Shannon-Thompson family back on the small screen. (Cardwell and her younger sister Jessica sat this one out.) And while we watched Shannon transform herself as she lost 300 pounds in season one, season two introduced us to the next important man in her life.

“If I’m having a bad day, he will go get a candle,” Shannon told Us Weekly of her new beau prior to revealing his identity. “It’s been a good, probably, 15 years since I’ve been happy. He’s one of a kind I have to say.”

She added, “We met through some mutual friends. Somebody said, ‘Hey, take a picture with Mama June.’ He’s like, ‘Who the hell is that?’ And I was like, ‘Did you live underneath a rock?’ and he was like, ‘No.’ He just don’t watch reality TV. I mean, he does now watch the show, but he doesn’t care two cents less about the cameras…because outside of this, we are a very normal, everyday crazy bunch.”

And when season two premiered, we met Geno Doak—and shortly thereafter, his rap sheet. As the Daily Mail unearthed in July, Doak had been arrested and charged with felony burglary in 1996, which he pleaded guilty to, serving three months behind bars. He was arrested again in 2009 for felony theft after taking a cargo trailer belonging to a Methodist church in Georgia, kicking off a string of arrests that eventually saw him serve 15 months at the Coastal State Prison in Savannah, Ga. before being paroled in early 2015. Shannon reportedly briefly dated Doak in late 2015 when she hired him to remodel her new home in Hampton, Ga. before eventually reuniting with him in 2017.

“Yes, I have found love, y’all. I have a great, wonderful guy, Geno, and I feel like a kid again,” Shannon told viewers in season two, adding that Doak “is probably the person I want to spend the rest of my life with and he is going to be my husband one day.”

He’s also the person who might’ve gotten her into her biggest bout of trouble yet.

Days before season three of Mama June: From Not to Hot was set to debut, Shannon and Doak were both arrested outside an Alabama gas station. E! News confirmed that Shannon was arrested on March 13, 2019 for alleged possession of a controlled substance and drug paraphernalia, while Doak received an additional charge of alleged domestic violence third degree. According to TMZ‘s initial report, police were tipped off about the alleged crimes when someone called in a report of two people engaged in a heated confrontation at said nearby gas station. They both were released on bail and, as TMZ later reported, hit up a local casino together shortly thereafter.

Despite the arrest and its greater implications, WEtv went ahead with the premiere as planned and has made no indication that it will be pulling future episodes of the show from its schedule. A rep for the network had no comment when asked.

Since we met her, the saga that is Mama June Shannon’s life has been filled with one shocker after the next. And the only thing that’s for sure? It’s not over yet.