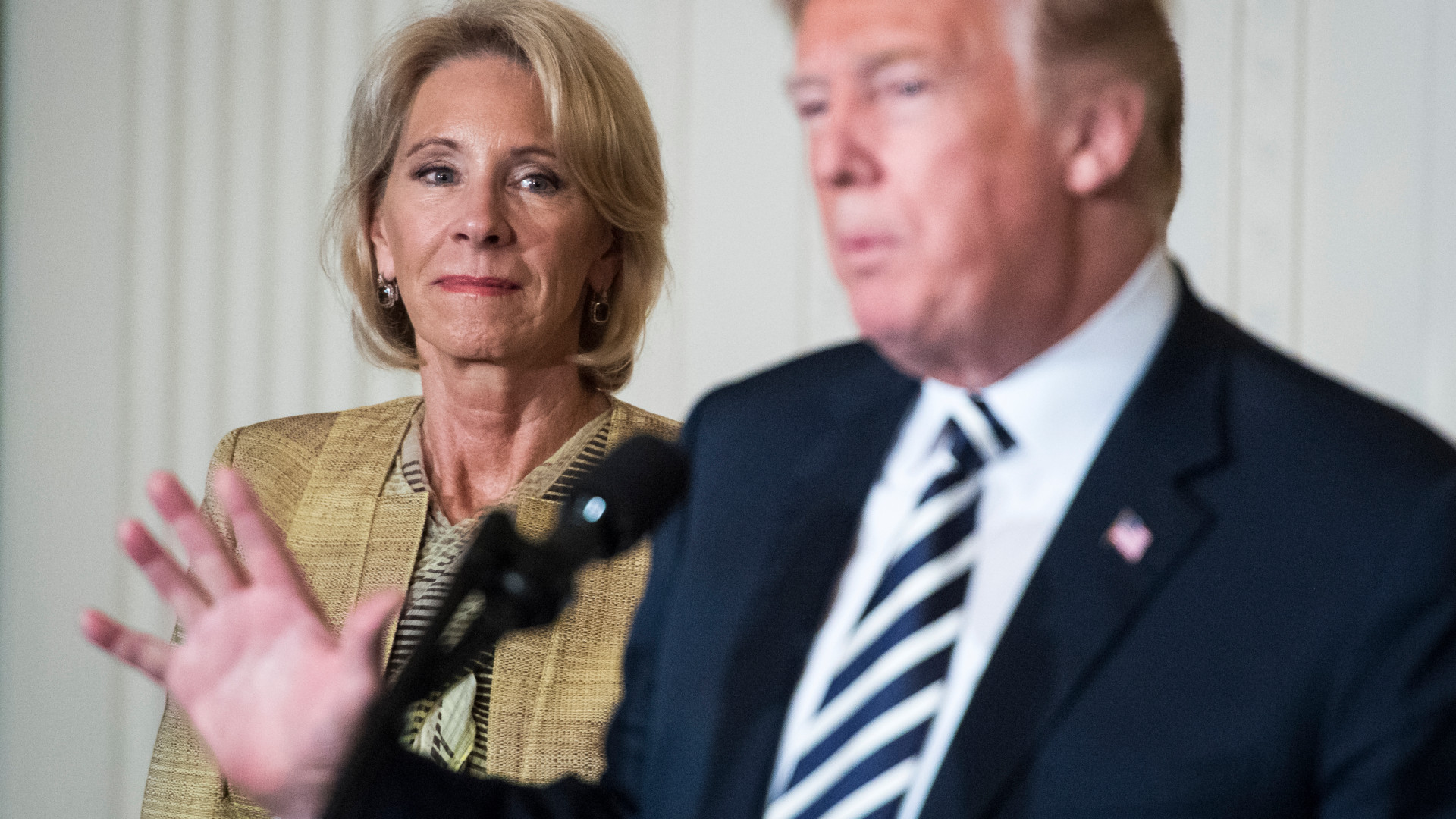 A week after federal prosecutors revealed just how brazenly rich families cheat to get their kids into elite colleges, the White House proposed changes to higher education laws that would further widen the college access gap between people born into money and those less fortunate.

On Monday, President Donald Trump and Education Secretary Betsy DeVos announced that they want Congress to cap the amounts that students and families can borrow for post-secondary schooling. Though the proposal markets the lending caps as a path to reducing the tuition colleges charge, higher ed experts warned it would actually just make it harder for working-class families to compete with their richer peers on schooling.

If there’s one thing that last week’s bribery scandal — which led to dozens of arrests and thousands of tweets from outraged internet rubberneckers — threw into stark relief, it was that the upper crust is willing and able to spend huge amounts of money to burnish their children’s educational credentials.

“The fact that we have a two-track system for graduate and undergraduate education shows that we treat higher education as a commodity, and the borrowers as consumers, and that’s not how we should treat them,” Student Debt Crisis executive director Natalia Abrams told ThinkProgress. “I think with this whole college bribery scandal, we’re seeing that colleges are brands in their own right. When people are paying an extra million dollars to send their kids to a college on top of the yearly costs,” she said, it’s evidence that government should step in somehow.

But capping what students can borrow would exacerbate rather than ease the class tensions that already dominate higher education. If the Trump-DeVos proposals succeed in shifting more of the immediate costs of college onto students, wealthy families will absorb the blow more easily. Middle-income families eager to keep up, however, would end up taking on much more costly private student loans to fill the gap created by the caps. Their inevitable struggles to make the often-usurious payments on such loans, will allow lawmakers to simply shrug and click their tongues about personal responsibility — especially since those new defaults won’t be hitting the government’s own balance sheet.

And for the vast bottom of the income and wealth distribution where shaky credit histories put even those predatory loans out of reach, graduate degrees – and in some cases even undergraduate education – would simply become inaccessible.

Though the policy would “disproportionately affect students who can’t get private loans,” as Seton Hall college finance expert Robert Kelchen told Marketwatch, it is based on policy logic with wide and longstanding support – especially from the political right.

Conservative lawmakers and some academics believe that capping government lending amounts would induce educational institutions to lower tuition and living expenses. But the evidence for that market engineering hypothesis is shaky.

The proposal provides no hard numbers, but higher education experts pointed to a 2017 bill crafted by Rep. Virginia Foxx (R-NC) that contained specific plans for reaching several of the policy goals the White House pointed toward.

The legislation included a $12,500 annual cap for parent loans to fund dependent children’s undergraduate or graduate degree costs. Even experts who support the general idea that colleges would cut prices in response to a lending cap from Washington say such a figure is too low to work.

“Some reasonable cap on borrowing definitely makes sense but capping it too low would mean that the private market would have to fill in the gap,” New America higher ed expert Clare McCann said. “That has implications for equity and access for those students.”

McCann said capping loans at a more reasonable level would probably drive down costs for graduate degrees and at for-profit undergraduate programs, as those two categories of institution are more likely to target their pricing based on what the government will fund. But for the vast majority of the higher education student body – undergrad degree-seekers at public universities – a cap on lending wouldn’t shift prices at all.

The better way to reduce the gap between what families borrow and what kids eventually earn, McCann said, is to drive more direct funding back into state schools. States are putting less money into higher education than they did before the Great Recession, and some kind of matching federal funds incentive to restore those defunct investments would go a lot further toward fixing the cost curve for future graduates.

But none of these approaches to the balance of costs and debt for future learners will do anything for the 45 million people who already owe $1.5 trillion on student loans. There are better and worse approaches to reshaping the debt curve for future generations, Abrams said, but policymakers are in danger of whistling past an economy-shrinking graveyard if they don’t also get radical on behalf of existing borrowers.

“So many of our policies are focused on new students. Let’s say this proposal helps new borrowers. It doesn’t touch any of the existing borrowers. We need to be doing things for them,” Abrams said. “Full debt forgiveness, or at least partial forgiveness for older loans, is something we can attain.”

That kind of debt jubilee could be paid for through higher taxes on the same wealthy families that currently burn millions of dollars to help their kids get into the fanciest schools – whether through outlandish bribery schemes or more traditional donor patronage.

Big ideas for tackling the existing debt crisis are unlikely to attach to the Higher Education Act legislative process, however. And as long as lawmakers are focused on the future of high ed funding, the risk remains that they’ll find ways to make things worse down the road.

The administration’s policy proposal calls for expanding the Pell Grant system, for example – but not by restoring funding that’s been cut from the program. Instead, the White House signaled a desire to grant wider access to Pell money for educational providers – something McCann called “an incredibly popular bad idea.”

The grants can already be used for educational programs as short as 15 weeks. Proposals circulating in recent years that reflect the vague language of Monday’s policy statement would allow even an 8-week course to tap into Pell funding that was initially intended to prop up low-income students’ access to two- and four-year undergraduate programs with a clearer historical link to sustainable employment and earnings opportunities.

“A lot of students will be enticed by the notion of an 8-week program that leads to high wages, and that promise won’t be fulfilled,” McCann said. “They’ll be spending their Pell Grant eligibility down on a program that just won’t offer the kind of opportunity they think they’re signing up for.”

Such false promises are simply too tempting to resist for borrowers. For-profit colleges have long marketed their offerings in misleading fashion, aiming their ads at daytime television viewers and targeting their price schedules to extract exactly as much cash as federal lending policies allow. This marketing push could grow even more aggressive if the feds let those same vultures into the Pell vault.

This administration is famously cozy with the for-profit education industry. DeVos has already halted or reversed a variety of regulatory efforts from her predecessors that aimed to reshape business models and rein in profiteering by the kinds of companies that made her family’s fortune.

“What Trump and Devos are doing with education is just unwinding the little bit of good that Obama did at the end of his term,” Abrams said. “It’s all about helping big business and hurting borrowers and students.”

Potentially kleptocratic policymaking around higher education finance would be ethically troubling even in normal times. But total outstanding student loan debts cracked the trillion-dollar mark all the way back in 2013. Scarcely half a decade later, that bubble has leapt to $1.5 trillion. This overhang that’s preventing millions of young people from investing in big purchases that create jobs in construction, manufacturing, and other sectors has already reached crisis levels of drag on the economy.

“We believe in helping borrowers along the way with incremental policy decisions, but ultimately the system is so corrupt and bureaucratic that it’s similar to health care, where you just need a new system,” Abrams said.

Instead of making college a bit cheaper or making loans a bit easier to repay, she said, lawmakers should be focusing on how to make college free. A handful of 2020 primary hopefuls in the Democratic party have already staked out territory on this issue. Last week’s bribery scam news arguably help make the case for going big instead of tinkering at the margins of the existing system.

Using the current crisis to undermine lending programs and push borrowers into the predatory arms of private education-finance models could undo decades of work undertaken to ameliorate the economic disparities in American higher education.

“We have to remember why the student loan system get created: So everyone could go to college, not just the rich,” Abrams said. “I fear we’re going back to that system where it’s a two-tiered system where only people of means can go to college.”