Annie Smith has had enough with the social media hate.

The pregnant fiancée of Lil Xan took to Instagram to reply to a social media user who made a comment about the couple’s relationship. Annie’s lengthy response was actually too long for her to leave in her comments, so she posted it on her Instagram Story. In her reply, Annie clapped back at haters and opened up about her relationship with the 22-year-old rapper (née Nicholas Diego Leanos).

“I am 3 months pregnant, traveling all over Europe on a tour bus with 9 men. I have taken over 1,000 photos, autographed hundreds of shirts, pictures, etc. Take hours out of my day to go on my YouTube/Instagram and like and reply to comments. Answer DMs, (I get over 1,000 an hour) all while taking care of my fiancé all day and night,” Annie began her response. “Never once have I gone into Diego’s account without his permission.”

“Diego and I share a phone,” Annie continued. “We see everything each other does and trust each other. Sometimes he’s too busy and asks me to post something for him or check his email. I am the one who TAKES the photo of Diego with women most of the time unless they take a selfie.”

She went on to assure everyone that she’s “never once made a decision” for the rapper.

“It really doesn’t matter what you think because you don’t know him or I personally and don’t know how we interact but Diego is an adult and makes decisions on his own like an adult does,” she later wrote. “I’m his soon to be wife, which means I do a million more things than a manager or an assistant all while loving him and taking care of myself and our child growing inside my body.”

Annie then added that if anyone thinks otherwise it’s because “fans/random people on the internet make ASSUMPTIONS.”

“Every girl who Diego has blocked has assumed it’s my doing lol when I’ve literally watched him do it for his own reasons,” she shared. “You do know that people lie right. Sometimes when someone is jealous or doesn’t get their way they message him and attack him, for example, there are many other scenarios but I am just naming one.” 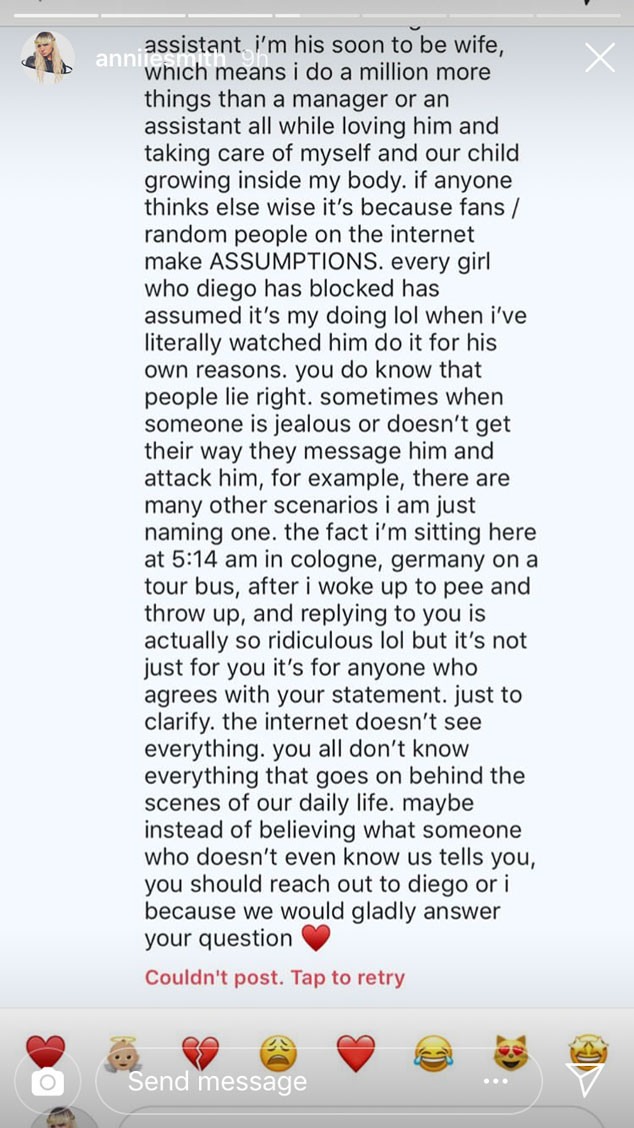 “Just to clarify. The internet doesn’t see everything. You all don’t know everything that goes on behind the scenes of our daily life,” Annie concluded her post. “Maybe instead of believing what someone who doesn’t even know us tells you, you should reach out to Diego or I because we would gladly answer your question.”

Annie added on her Instagram Story that she has “no hate” towards the one Instagram user and appreciates her honesty.